They affect that he blames the mafias or defends the rejections at the border from the Spanish side with Moroccan gendarmes, without providing medical aid. 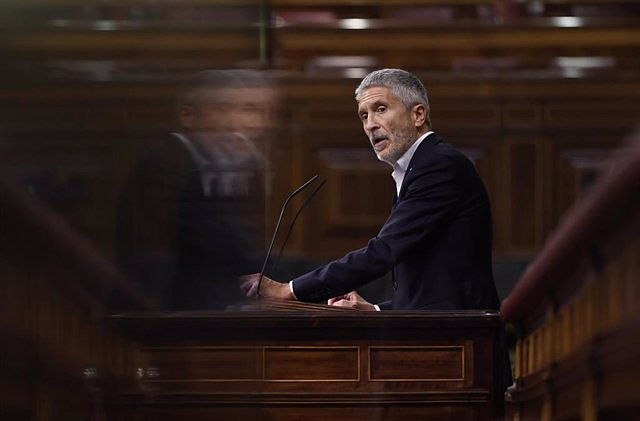 They affect that he blames the mafias or defends the rejections at the border from the Spanish side with Moroccan gendarmes, without providing medical aid

All political groups have harshly criticized the Minister of the Interior, Fernando Grande-Marlaska, on Wednesday for placing the tragedy of June 24 in Morocco when 1,700 migrants staged what he has described as a "violent assault" on the Melilla fence. Specifically, they have made it ugly that he does not give figures of deaths, blames the mafias without evidence or defends rejections at the border, with the help of Moroccan gendarmes on Spanish soil and without providing health care.

"A violent attack on the borders or our agents cannot be assumed," said Grande-Marlaska, for whom the police response was "proportionate." This has earned him the reproach of United We Can and the rest of parliamentary partners, who have recalled that at least 23 migrants died, the "greatest tragedy" or "massacre" on the Spanish border, exceeding the 15 deaths of Tarajal in 2014, when the PP governed.

The reproach of the groups has also extended to references such as "no man's land" in the chronology of events of 24-J, as well as the use of anti-riot material by the police of both countries in what the PNV has described as "dehumanized" intervention, due to the fact that the bodies of migrants were piled up on the ground for hours, without offering them health care or opening the Spanish door to facilitate evacuation.

Another point of unanimous criticism from the partners has been about the Interior's strategy of blaming the mafias for promoting the attempt to enter Melilla --and not the previous raids on the Moroccan side--, as well as not explaining why gendarmes from the neighboring country entered Spain to carry out the rejections at the borders, "summary expulsions" according to the version of EH Bildu.

In his reply to the groups, Grande-Marlaska reiterated that the events of 24-J occurred "mainly" in Morocco, and only "very tangentially" in Spain. In fact, she has joked that some parties resort to the cadastre because they want to "put flags" in the territory of the neighboring country, denying -- as she did at the end of June in Congress -- that Moroccan gendarmes infringed Spanish sovereignty.

Grande-Marlaska has referred to the investigations opened by the Prosecutor's Office and the Ombudsman in the face of repeated allusions to the videos showing Moroccan gendarmes on Spanish soil, which he has related to "eye contact" that, according to him, is punctual and common among police officers who share a border. In addition, he has reiterated that the rejections at the border were carried out in accordance with the legislation.

"What happened is Bolsonaro's Brazil, do not criminalize migrants, they are not violent people; you do terrible damage when you make a far-right speech," ERC deputy María Carvalho has reproached him, for whom the justification for the rejection at the border shows that the PSOE "does not want to put an end to hot returns in the reform of the 'gag law'".

Grande-Marlaska, who has pointed out that it is "false" as the ERC maintains that firearms were used on 24-J, has defended that "no one feels more" the deaths than the Government, the first being President Pedro Sánchez, and recalling that Salvamento Marítimo and the Civil Guard "save lives" every day at sea by rescuing migrants. Having said this, it has justified defending the border if, as happened on 24-J, stones or homemade incendiary devices are thrown.

In addition, the minister has maintained that what happened at the Melilla fence "has nothing to do" with the deaths in Tarajal, recalling that the then PP minister, Jorge Fernández Díaz, manipulated the videos of the police intervention. "Cheer up, beat him in transparency," Bildu deputy Jon Iñarritu has challenged him, encouraging him to publish those videos of the border perimeter.

The PP has defended that it has been the "most loyal group" in its speech in Congress, focusing its criticism on the "opacity" of the Ministry of the Interior by recalling that NGOs raise the number of deceased migrants to 72, compared to 23 which has officially recognized Morocco.

The 'popular' deputy Ana Vázquez has pointed out that the National Human Rights Council of Morocco was the one that denounced that Spain did not open the doors at the border to help migrants. She has also asked if the "information theft" with the Pegasus program is related to the policy followed by the Executive and that has made Grande-Marlaska the "champion" of Europe for setting a record since 1999 in irregular entries of migrants.

For Vox, what Morocco is doing is defined as a "teasing while looting the pocket" of Spain and the European Union, to which Ciudadanos has added that what happened at the Melilla fence was a "systemic failure" of the entire Government.

The deputy of United We Can Enrique Santiago has maintained that the priority is that migrants never die again as happened on 24-J next to the Melilla fence and, immediately afterwards, he has made it ugly that the issue is addressed as if it were a war. "There is no invasion or any problem of sovereignty," he has said.

The minister has closed the intervention in Congress defending his migration management, which according to him is already giving results, also in terms of international protection. "Morocco and Algeria are two strategic partners," he pointed out, pointing out that irregular entries have generally fallen by 35% compared to 2021 if only that of citizens of this second country is observed.

‹ ›
Keywords:
MarruecosInmigraciónMarlaska
Your comment has been forwarded to the administrator for approval.×
Warning! Will constitute a criminal offense, illegal, threatening, offensive, insulting and swearing, derogatory, defamatory, vulgar, pornographic, indecent, personality rights, damaging or similar nature in the nature of all kinds of financial content, legal, criminal and administrative responsibility for the content of the sender member / members are belong.
Related News