The Government will urge offices, businesses and transport to control the temperature

The Government will urge companies, offices, businesses, shopping centers and transport to control temperature conditions to avoid energy waste, within the framework of the package of urgent measures for energy efficiency and saving that it will approve in the Council of Ministers of the next Monday. 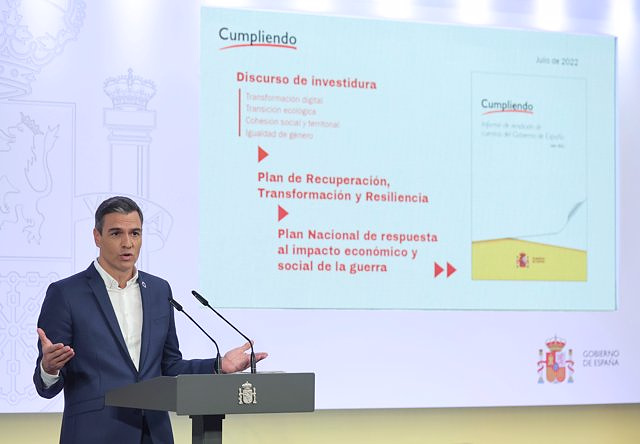 The Government will urge companies, offices, businesses, shopping centers and transport to control temperature conditions to avoid energy waste, within the framework of the package of urgent measures for energy efficiency and saving that it will approve in the Council of Ministers of the next Monday.

The objective is that in summer the air conditioners of premises, establishments and transport are not below 27 degrees, while in winter the heating systems should not exceed 19 degrees, sources familiar with the measures informed Europa Press. .

This first package of measures will be aimed at the private sector, but will not be coercive, and it is expected that households will be left out in the first instance.

The Executive will also appeal to rationalize the switching on and off times of air conditioning, ventilation, hot water, lighting and office equipment in office buildings, as well as the rest of the energy-consuming equipment, so as to minimize its energy use, thus transferring part of the plan of energy saving and efficiency measures of the General State Administration and the entities of the state institutional public sector, approved last May.

It is expected that the measures will also include the promotion of photovoltaic installations for self-consumption in buildings, which could count on subsidies. It should be noted that this Friday, the National Commission for Markets and Competition (CNMC) has adapted a series of measures that simplify the procedures for contracting electricity self-consumption in Spain, with the aim of promoting the entry of renewable energies, the decarbonization of the economy and competition in the retail market.

Specifically, the regulator has simplified the administrative procedures related to contracting, billing and claims for low-power and collective self-consumption.

At the moment it is unknown if the package of measures will include, as happened with the Administration's savings plan, the recommendation to reinforce the remote work modality, in order to reduce the energy impact produced, both by commuting to the workplace, as well as energy consumption in the workplace itself.

In any case, it is assumed that the Executive will commit to promoting the use of public or collective transport and other sustainable mobility measures, taking advantage of the fact that the Government will discount 100% of the subscriptions for various trips for Cercanías, Rodalies and medium-distance trains operated by Renfe, so they will become free from September 1 of this year until December 31.

The use of bicycles will also be promoted as an example of sustainable transport, facilitating parking points.

The Government hopes that these measures will be sufficient to comply with the agreement reached with Brussels by which Spain undertakes to reduce gas consumption by 7%, with the aim of reducing Europe's dependence on gas from Russia.

The Executive adopts this plan after the round of consultations held between the Third Vice President and Minister of Ecological Transition, Teresa Ribera, with all the actors (consumer associations, energy companies, social agents, parliamentary groups, etc.) in recent days.

This proposal will also propose substituting the use of gas for other fuels where possible, as well as promoting the electrification of demand and the entry of more renewables.

The measures in this plan are part of the European Union's strategy to deal with this possible gas supply cutoff by Russia.

On July 13, Ribera stated that the situation in Spain is "more flattering" than in other neighboring countries due, among other factors, to the diversification of its natural gas supply, the capacity of its regasification plants and some levels of underground storage (72%) and liquefied gas plant tanks (80%) at "historic highs".

However, he underlined that this tense scenario makes it a situation of "relative calm", for which he opted for a plan to address the most intelligent possible use of energy, thus promoting energy savings and efficiency.

‹ ›
Keywords:
Eficiencia EnergéticaConsejo De Ministros
Your comment has been forwarded to the administrator for approval.×
Warning! Will constitute a criminal offense, illegal, threatening, offensive, insulting and swearing, derogatory, defamatory, vulgar, pornographic, indecent, personality rights, damaging or similar nature in the nature of all kinds of financial content, legal, criminal and administrative responsibility for the content of the sender member / members are belong.
Related News