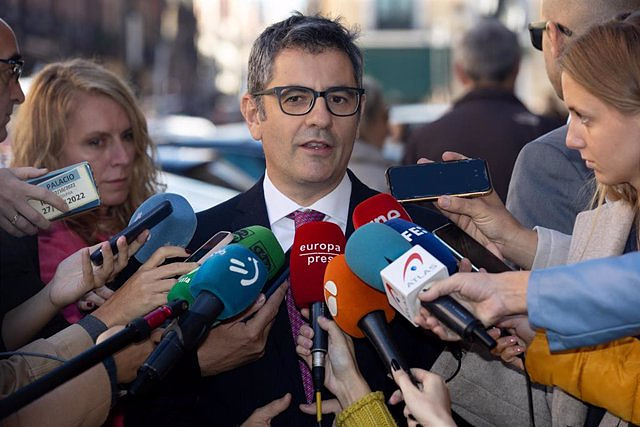 The Minister for the Presidency, Félix Bolaños, assured this Monday that the Government will study in detail a reform of the crime of embezzlement, for which the main leaders of the 'procés' were also sentenced, if the ERC decides to present an amendment to Congress to the bill with which PSOE and Podemos want to reform the Penal Code to repeal sedition.

"As happens with any amendment, what will be done will be to study it in depth," said Bolaños, who has denied that the ERC has proposed or is already negotiating with the PSOE in this regard. "It is difficult for me to give an opinion on anything," he said when asked if the Government does not rule out modifying the embezzlement as well.

In an interview with Cadena Ser, collected by Europa Press, the minister stressed that the parliamentary process to reform the Criminal Code is under way and wanted to point out that, although the crime of sedition will be eliminated, others such as rebellion or disobedience "have not touched".

"The key is that many of the crimes that are related to the events of 2017 have not been touched on," Bolaños replied when asked if the leader of the ERC, Oriol Junqueras, had sent the Government any request to change the embezzlement.

Bolaños, who has summoned to wait for the proposals of the groups "on paper and not in interviews", has said that what is sought with the "substitution" of sedition is to eliminate a "black point" of the Penal Code and ensure " coexistence in Catalonia and in Spain".

‹ ›
Keywords:
PSOEERCPodemosFélix Bolaños
Your comment has been forwarded to the administrator for approval.×
Warning! Will constitute a criminal offense, illegal, threatening, offensive, insulting and swearing, derogatory, defamatory, vulgar, pornographic, indecent, personality rights, damaging or similar nature in the nature of all kinds of financial content, legal, criminal and administrative responsibility for the content of the sender member / members are belong.
Related News