It will be forced to turn off lights and shop windows in public buildings and shops that are not in use after 10:00 p. 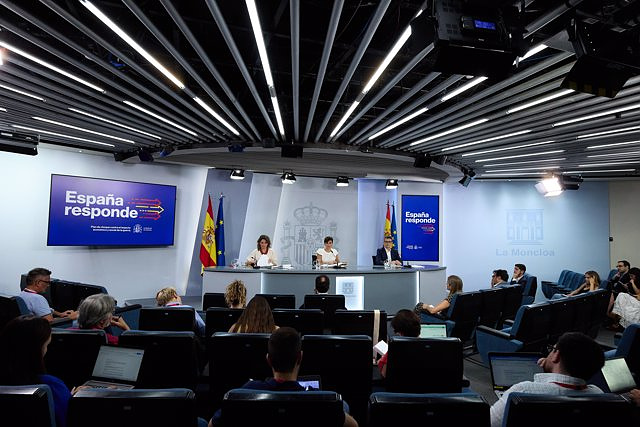 It will be forced to turn off lights and shop windows in public buildings and shops that are not in use after 10:00 p.m.

The Government has approved a first package of energy saving and efficiency measures that includes the obligation in public buildings, commercial spaces and department stores, transport infrastructures (airports and train and bus stations), cultural spaces and hotels to limit to 27 degrees the use of air conditioning in summer and heating at 19 degrees in winter, as announced by the third vice president and minister for the Ecological Transition and the Demographic Challenge, Teresa Ribera.

At a press conference after the Council of Ministers, Ribera indicated that this package of measures, which complements the Regulation of Thermal Installations in Buildings (RITE), will also force the lights of shop windows and public buildings that are unoccupied to be turned off after 10:00 p.m., a measure for which they will have seven days to comply. In the case of all these initiatives, the period for their application will be one week from their publication in the Official State Gazette (BOE) and they will be valid until November 1, 2023.

The owner of the branch also specified that the decorative lighting of facades will be turned off after 10:00 p.m., while the regulation of exterior lighting will only affect buildings for public use, not "ornamental" ones, for example, lights christmas "There is no forecast for ornamental lights, today we are only talking about buildings," she reiterated.

Regarding the sanctions that could be given in the case of not complying with this regulation, Ribera indicated that "there is a sanctioning regime that would be applied", but that the surveillance corresponds to the autonomous communities.

Likewise, before September 30, both buildings and premises will be required to have automatic closures on the access doors to prevent them from being permanently open, with the consequent waste due to energy losses to the outside.

Likewise, posters must be incorporated to explain these saving measures in the establishments, as well as to inform about temperatures and humidity levels. "We want to invite you to point out with posters, information panels and thermometers that show the temperature to verify that these provisions are complied with," he said.

Ribera also encouraged other public administrations and even companies to incorporate "more measures" such as promoting teleworking, which would allow "concentrating schedules, saving on travel and the thermal consumption of buildings." "We were able to do it during the pandemic and we've learned a lot," he recalled.

The measures also include the requirement to undergo an extraordinary review before December 31, 2022 for those obligated buildings that have carried out the previous procedure before January 1, 2021, so that all buildings with relevant air conditioning consumption have passed an inspection in the last two years.

In this way, to quickly carry out energy improvement works in public administration buildings, they will be able to apply emergency contracting procedures. In addition, these contracts will be executed in less than a month from their formalization, according to the head of the branch.

Ribera stressed that this first battery of measures is an "important and powerful" first package that will be completed with the contingency plan that will be presented in September and that will allow "100% compliance in order to guarantee solidarity with Europe." "We all understand that it is an extraordinary situation and it is a reasonable agreement that we must fulfill out of solidarity with the rest of the Europeans," he reiterated.

"I want to thank business associations, companies and public actors who have already expressed their support for this common effort. Europe has much more at stake than energy and with this we also save on bills and consumption," he stressed.

Ribera estimated that one degree less saves 7% of energy consumption, which would allow companies to save more than one million euros in a year.

‹ ›
Keywords:
Eficiencia EnergéticaTeresa RiberaDespoblación En España
Your comment has been forwarded to the administrator for approval.×
Warning! Will constitute a criminal offense, illegal, threatening, offensive, insulting and swearing, derogatory, defamatory, vulgar, pornographic, indecent, personality rights, damaging or similar nature in the nature of all kinds of financial content, legal, criminal and administrative responsibility for the content of the sender member / members are belong.
Related News