PSOE and Podemos add 30 more amendments agreed with their partners and leave everything ready for the final votes on Thursday. 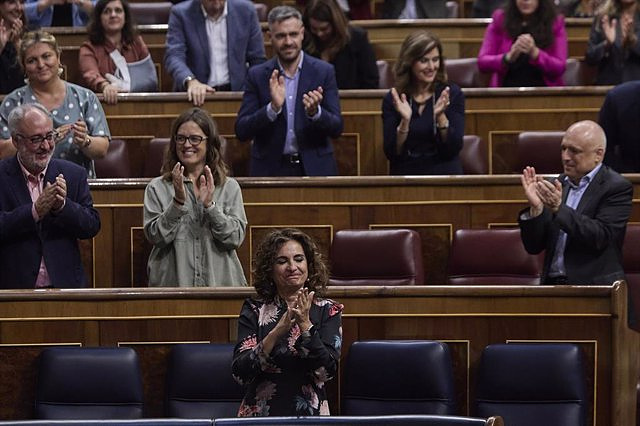 The General State Budgets for 2023 have passed the second voting in plenary session of Congress this Wednesday, incorporating a total of 30 new amendments agreed with the Executive's parliamentary allies into the coalition government project.

Added to yesterday's 38, the transactional amendments approved make a total of 68 between the first two plenary days of the public accounts project.

After more than 12 hours of debates this Wednesday, in which eleven ministers have been defending the budgets of their respective departments, the amendments submitted by the different parliamentary groups to next year's public accounts have been voted on. .

A second day of voting in which no amendment has been introduced with the vote against PSOE or Podemos, so there have been no shocks as there were on the first day of voting, when the PNV 'cast' a amendment to allocate seven million euros to Saharawi refugee camps, with the PSOE voting against and the support of Unidas Podemos, PP, Ciudadanos, Más País, Compromís, Junts and the BNG, but which both the PSOE and ERC rejected.

Throughout the voting on amendments, the Government has only allowed the amendments it wanted to pass and not only those presented by Ciudadanos and the PP have been rejected, but also others by Junts, ERC, PNV or Más País, among others.

From Vox, both on the first day and on the second, they have chosen to vote in favor of those amendments of their interest, while they have not ruled on the rest.

As regards the compromise amendments, the coalition government has reached agreements with various parties in Congress to ensure more 'yes' than 'no' votes.

With Bildu, the extension throughout 2023 of the 2% limit for updating rental income and the 15% increase in non-contributory pensions has also been approved, and that will advance issues of Historical Memory and self-government.

Additionally, the incorporation of 200 new MIR parking spaces has been approved, reaching a total of 1,200 additional parking spaces by 2023, in addition to the creation of the March 3 Memorial in Vitoria-Gasteiz and the transfer of the Traffic and Road Safety competence to the Foral Community of Navarre.

On the part of the PDeCAT, Congress has approved measures to modify the regime of self-employed workers dedicated to street vending, tax benefits for different ones held in Catalonia and other modifications in the cooperative regimes, with the aim that they are not harmed by the indefinite contract.

In addition, Congress -with the favorable vote of PSOE and Podemos- today approved two other proposed amendments to the PDeCAT, referring to a water resources management program for irrigation and natural paths; and a package of 90,000 euros to prepare a rural road in the municipal entity of Sant Martí Torroella.

This is in addition to the measure to declare all bus lines concessioned by the State free during 2023. In total, the measures agreed between PDeCAT, PSOE and Podemos will involve investments of 40 million euros for Catalonia.

A tax benefit plan for electric and alternative energy vehicles has also been approved, as well as investments of one million euros for an underpass under the N-150 south roundabout at the Barberá del Vallés exit and another million for construction of a road traffic bridge that connects the municipality of Sant Feliu de Llobegrat and the neighborhood of Mas Luí Sant Just Desvern with the B-23.

On the ERC side, transactional amendments have been incorporated into the budgets to transfer 900 million euros to Catalonia to undertake works on "key" infrastructures in the rail and road spheres, in addition to including mechanisms for budget execution in the region .

Among the proposals approved this Wednesday are 40 million euros for the Barcelona Metropolitan Transport Authority, to finance regular passenger transport. Five million are also introduced for performances in the Maresme N-II; eight million for improving connectivity on the AP-2 and AP-7 and another five million for improving the N-260 of the Pirenaico axis.

However, the Republican formation has not yet made known the meaning of its final vote, which if positive would give the Government a comfortable majority for the budget project in the Lower House.

With regard to Más País, proposals have gone ahead to promote collective self-consumption facilities, as well as a two million item in favor of the Center for Legal Studies of the Justice Administration and another package of one million euros to create the Observatory of Eating Disorders.

Throughout the votes on Tuesday and Wednesday, items have also been approved for the improvement of road safety and the implementation of innovative methods for lanes for public transport and high-occupancy vehicles on the A-42. In turn, the adaptation of the left lane of the A-2 as a BUS-HOV lane in both directions has been approved.

Likewise, another transactional amendment by Más País and ERC has been approved to allocate up to 24 million euros to a state-level oral health plan.

And this Thursday will be the time to approve the different ministerial sections of the Budget, knowing that a defeat in any of them would mean the demolition of the entire Government project.

In principle, and in the absence of the ERC defining its vote, the PSOE and Podemos already have enough support to win the vote after obtaining the support of PNV, Bildu, Más País-Equo, Compromís, Coalición Canaria and PRC, as well as the BNG abstention.

In front of him he will find himself safe with the rejection of PP, Ciudadanos, Vox, Junts, the CUP, Foro Asturias, the two deputies from Navarra Suma who were expelled from UPN, and the one from Teruel Existe, who this Wednesday announced his vote against the not accept their proposals to encourage companies that operate in unpopulated areas.

‹ ›
Keywords:
Presupuestos GeneralesCongreso De Los Diputados
Your comment has been forwarded to the administrator for approval.×
Warning! Will constitute a criminal offense, illegal, threatening, offensive, insulting and swearing, derogatory, defamatory, vulgar, pornographic, indecent, personality rights, damaging or similar nature in the nature of all kinds of financial content, legal, criminal and administrative responsibility for the content of the sender member / members are belong.
Related News