He asks not to forget that there is a separation of powers, although he denies that this episode involves a confrontation between government partners. 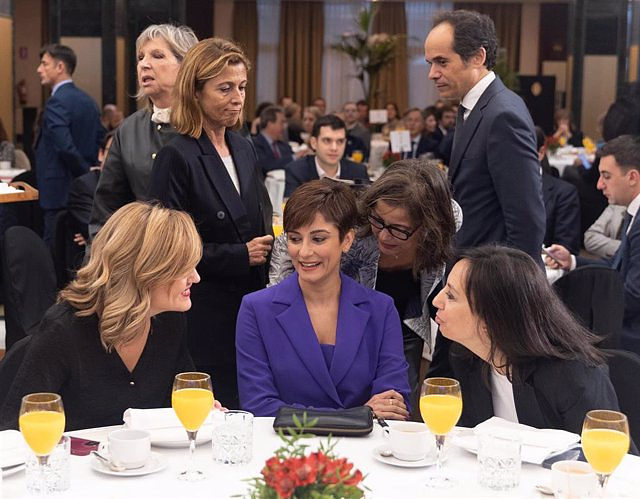 He asks not to forget that there is a separation of powers, although he denies that this episode involves a confrontation between government partners

The Government spokesperson and Minister for Territorial Policy, Isabel Rodríguez, has shown her support for the judges this Thursday after the criticism received from the Minister for Equality, Irene Montero and members of Podemos for the application of the law of ' only yes is yes' that is causing a wave of reductions in prison sentences for those convicted of sexual crimes.

Thus, he has expressed his "absolute respect for all judges and magistrates" in a personal capacity and on behalf of the Government, as he pointed out at a New Economy Forum breakfast. He has also asked to never forget the separation of powers of the State. "The judges interpret and apply the law and absolute respect must be maintained for the action of the judges," he added.

However, he has rejected that this episode represents a new confrontation between the government partners, PSOE and Unidas Podemos, despite the different opinions that they are conveying. When asked about it, she has responded with a simple "no".

Rodríguez has made reference to the cases that have been known in the last few hours - several revisions of sentences that have led to reductions in sentences and even releases - and has indicated that he understands "the citizen concern" that they are causing.

This Wednesday, the Minister of Equality, Irene Montero, the main promoter of the law, stated after learning about the reduction in sentences for rapists, that machismo "can cause judges to apply the law incorrectly or to apply it defectively."

In addition, Rodríguez has called for prudence to be able to "study" the causes that are causing this effect in each of the sentences "from the rigor", as he has requested. He has also stated that he trusts in the action of justice and the Prosecutor's Office so that a "unification of doctrine" takes place, in the same line that the President of the Government, Pedro Sánchez, indicated a day before.

"The judges are the ones who have to interpret the rules and do it according to their spirit and I trust that this will be the case," he said, while making it clear that the objective of the law is to increase the sentences for the aggressors and protect victims.

"Can anyone doubt what the will of the Government was and after Parliament when this law was approved? There is no other inspiration than the protection of women from abuse and aggression and condemning the aggressor," he said.

‹ ›
Keywords:
PodemosCrímenesIrene Montero
Your comment has been forwarded to the administrator for approval.×
Warning! Will constitute a criminal offense, illegal, threatening, offensive, insulting and swearing, derogatory, defamatory, vulgar, pornographic, indecent, personality rights, damaging or similar nature in the nature of all kinds of financial content, legal, criminal and administrative responsibility for the content of the sender member / members are belong.
Related News