The Government speeds up the processing of electrical networks and infrastructures

It also facilitates the injection of renewable gases and enhances self-consumption. 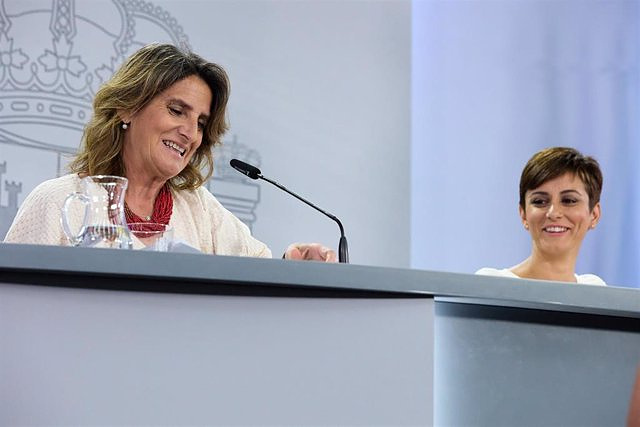 The Government will streamline the procedures for electrical networks and infrastructures, will facilitate the injection of renewable gases into the gas pipeline network, and will promote storage and self-consumption, as measures within the royal decree-law approved this Monday, aimed at reducing consumption quickly and to promote the electrification of the economy and the reduction of the consumption of gas of fossil origin.

Thus, the requirements are lowered, especially in the case of transport infrastructure and those considered unique, such as the interconnections between the islands, which correspond to Red Eléctrica de España.

Storage systems are also experiencing a strong boost, by enabling their incorporation into the park of historical renewables that receive a specific remuneration -there are 22 gigawatts (GW) wind and 8 GW photovoltaic-, and by reducing permits to modernize hydroelectric plants adding electronic equipment to its electromechanical groups, making them more flexible and allowing them to be used as pumps.

In the case of self-consumption, the change of modality is accepted --without surpluses or with surpluses-- every four months, and a new mechanism is established in the event that a new installation entitled to compensation for surpluses takes more than two months to regularize.

In addition, an administrative procedure is enabled so that renewable gas production facilities, such as biogas, biomethane or hydrogen, can be connected to the transport and distribution gas pipeline network, so that they gradually displace gas of fossil origin, informed the Ministry for the Ecological Transition and the Demographic Challenge.

Likewise, to accompany companies in their efforts to increase their savings and energy efficiency, the cabinet led by Teresa Ribera will release a new line of aid for the tertiary sector this Tuesday for public consultation.

With 100 million in charge of the National Energy Efficiency Fund (FNEE), this Program for energy rehabilitation in existing buildings in the tertiary sector (tertiary PREE) will be in force until December 2024.

The Institute for the Diversification and Saving of Energy (IDAE), a body attached to the Ministry and manager of the FNEE, will be in charge of coordinating the aid, which is delivered in the form of a direct concession to the autonomous communities and cities.

Likewise, the Executive also expands with an additional 100 million the Energy Efficiency Program in the industry. This program, already underway, was launched in 2019 and will be in force until June of next year.

So far, it has received more than 2,600 requests for aid from industrial companies, worth more than 400 million.

The program is also managed by the IDAE and territorialized with the autonomous communities and cities. It subsidizes improvements in technology in equipment and industrial processes, as well as the implementation of energy management systems, with the aim of reducing consumption and costs of companies, increasing their competitiveness, economic activity and job creation.

Originally endowed with 307.6 million, the current budget of the program, after this increase of 100 million, amounts to 633 million. As before, the autonomous communities and cities that are running out of their assigned budget can request more funds.

On the other hand, the Ministry also puts out a public hearing a proposal for a ministerial order that establishes the regulatory bases to grant aid to innovative energy storage projects hybridized with renewable generation.

The first call will be endowed with 150 million and the amount will depend on the size of the company and the needs of the project. The aid will encourage initiatives that allow progress in the deployment of energy storage and its integration into the electricity system, in a way that provides flexibility to renewable generation and contributes to the security, reliability and quality of supply.

Thus, they will finance the installation of hybrid energy storage modules with renewable installations, both new and existing.

These aids will be managed again by the IDAE, charged to the Recovery, Transformation and Resilience Plan (PRTR), and, specifically, to the Strategic Project for the Recovery and Economic Transformation of Renewable Energies, Renewable Hydrogen and Storage (Perte ERHA).

In the award, assessment criteria will be taken into account that seek the most efficient projects, those that provide stability to the network and contribute to security of supply, and the potential capacity of the applicants to carry out the project successfully.

In addition, in line with the objectives of the Perte ERHA, the creation of employment, the contribution to the demographic challenge and the fair transition or the participation of SMEs, among other factors to be assessed, will be positively scored.