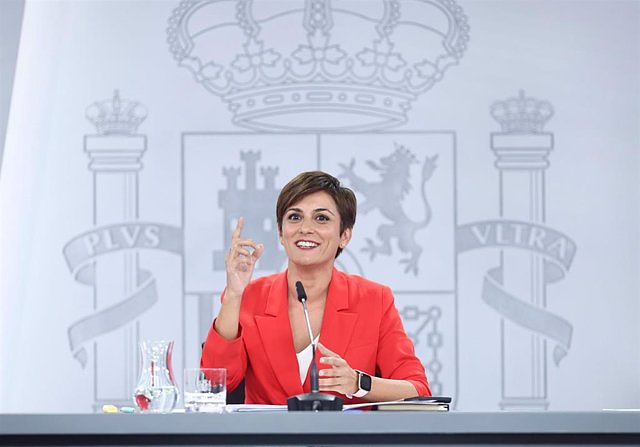 The spokesperson and Territorial Policy Minister, Isabel Rodríguez, has indicated this Tuesday that the abolition of the Wealth Tax "clears up the doubt" of who the PP is with and who it defends. "Which side are they on? Well, we are clearing up the doubt," said the minister, referring to the main opposition party.

At the end of the meeting of the Council of Ministers, Rodríguez affirmed that the fiscal debate opened by the president of Andalusia, Juanma Moreno Bonilla, at this moment is "exciting" because it allows to oppose the proposals of the Government of Pedro Sánchez addressed to the "majority" , compared to the measures of the PP, aimed at the "minority" that has the most.

In his opinion, the announcement of the elimination of a tax "may sound very good", but he added that this "fiscal gift" in Andalusia does not affect the vast majority of citizens, who are not "among the chosen ones" because they are some "Few" those in this country who have assets of more than one million euros.

Therefore, he added, the question that citizens must ask themselves is whether they are among the "privileged" Spaniards who benefit from this tax and the answer, in most cases, will be 'no'.

On the other hand, Rodríguez indicated, despite not being among the "chosen ones", it is a decision that does affect all citizens because they are going to stop collecting millions of euros to "give away" the abolition of this tax "to the richer, to those with greater assets", which translates into fewer resources for Andalusia, since the taxes are not there "to make a fortune for Mr. Moreno Bonilla".

For Rodríguez, it is an "exciting" debate that this Government is willing to give to oppose an Executive "for the majority", with tax reductions that affect 99% of Spaniards, such as the VAT reduction on gas approved today, against a policy for a "minority", with abolition of taxes for wealth of one million euros or scholarships "for the rich" in the Community of Madrid.

"What interests does the PP defend that are not in the affairs of State?" asked the government spokeswoman, who recalled that the main opposition party has not voted in favor of the labor reform, pensions, scholarships or free transport passes. "Which side are they on? Well, we are clearing up the doubt," she reiterated.

Rodríguez affirmed that the Government and the PP are showing "different options" for citizens to see it, and assured that the Sánchez Executive is with the Spaniards who have assets below one million euros or income below 100,000 euros. "We are a government for the majority and others are with the minority," he stressed.

Government sources have subsequently assured that they feel "comfortable" with this debate because they think that, despite being in the pre-election period and it seems that the tax cut is a good thing for citizens, they will explain throughout Spain the details of these measures that only benefit a minority, so they consider that the debate benefits them.