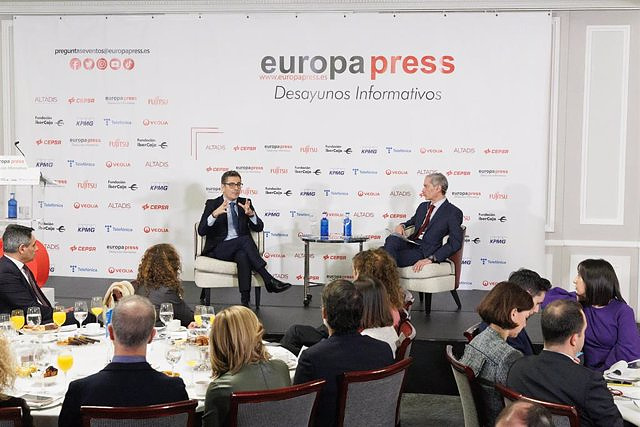 The Government has announced this Wednesday that Spain will join the shipment of 'Leopard' battle tanks to Ukraine based on the need for "unity" of all NATO countries and the European Union in response to Russia's military offensive .

"Of course, we will be with our partners from NATO and the EU because unity is what gives strength to the response", guaranteed the Minister of the Presidency, Félix Bolaños, in statements to the media in Congress.

As he has insisted, the operation is being forged in "coordination" with all the allied countries and he has avoided giving details about the number of units that could be sent from Spain, what model or the possibility of training Ukrainian troops in their management.

In addition, the Government does not contemplate that this donation goes through the Congress of Deputies, since Spain has been sending military material to Ukraine for eleven months now -since the beginning of the military offensive-.

Bolaños has thus shown his "respect" for the position of all the parliamentary groups but has insisted that the will of the Government is to work "univocally" in this international operation "to prevent Russia's aggression against Ukraine and that it be a response unity of all NATO and EU allies".

"My question is, if Putin had not received such a forceful response, such a unitary response from the European Union and NATO, would he have been satisfied with only invading Ukraine? Our freedom and our security are also at stake in Ukraine," he added. the minister.

Unidas Podemos has criticized this Wednesday the dispatch of tanks, predicting that it will only contribute to a "war escalation" and could have an "unpredictable and dangerous" response from Russia, as a nuclear power, as warned by the leader of Podemos and Minister of Social Rights, Ione Belarra.

‹ ›
Keywords:
Vladimir PutinUcraniaOTANFuerzas ArmadasUE
Your comment has been forwarded to the administrator for approval.×
Warning! Will constitute a criminal offense, illegal, threatening, offensive, insulting and swearing, derogatory, defamatory, vulgar, pornographic, indecent, personality rights, damaging or similar nature in the nature of all kinds of financial content, legal, criminal and administrative responsibility for the content of the sender member / members are belong.
Related News