The Government spokeswoman, Isabel Rodríguez, has replied this Tuesday to the president of Castilla La Mancha, Emiliano García Page, after his statements in which he questioned the members of the Executive and as well as the intervention of Pedro Sánchez in the plenary session of the Senate in the which described as "insolvent" the leader of the PP, Alberto Núñez Feijóo. 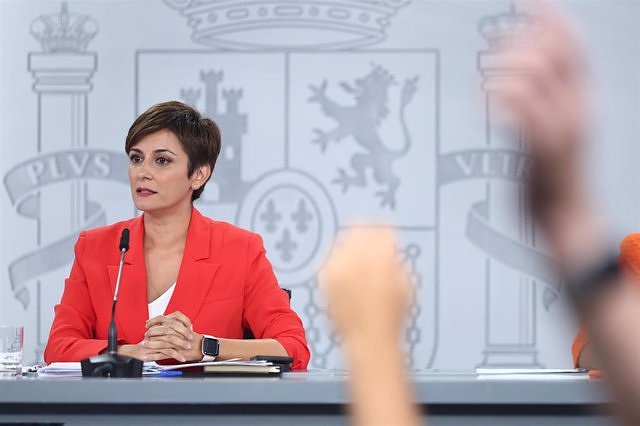 The Government spokeswoman, Isabel Rodríguez, has replied this Tuesday to the president of Castilla La Mancha, Emiliano García Page, after his statements in which he questioned the members of the Executive and as well as the intervention of Pedro Sánchez in the plenary session of the Senate in the which described as "insolvent" the leader of the PP, Alberto Núñez Feijóo.

In the press conference after the Council of Ministers, he again accused Feijóo of "insolvency", thus reaffirming the Government's message against the opposition leader. In this regard, he has indicated that "either it is insolvency or bad faith", and that he prefers to think that it is the former because he would have a remedy, but the latter has a "bad arrangement".

When asked about this matter, Rodríguez has avoided making further comments on Page's words. "I have nothing to say, they are her own statements and her own words and she is responsible for them," she has indicated.

The president of Castilla La Mancha stated in an interview published on Monday that he has a good political and personal opinion of Feijóo, does not share or identify with the description of "insolvent" and does not consider it correct. In this way, he showed his disagreement with Sánchez's fundamental message in the debate he held with Feijóo in the Senate earlier this month.

However, Moncloa sources have specified that they believe that the leader of the Socialists of Castilla La Mancha was not correct with his words, in which he also criticized the Executive's policy of pacts and the Government's attacks on the business sector, and only they find an explanation in their personal character. "He is like that," they point out.

In her response, the Government spokeswoman wanted to make "an uncompromising defense" of the Executive's action, which, according to what she has stated, is focused on expanding rights. Thus, she has indicated that she wants the Government to be valued in terms of "social profitability", she has affirmed. "We have contributed a lot in very difficult times, I think we can make a very positive balance", she has maintained.

Next, when asked if she believes that Page's criticism affects the government's strategy against Feijóo, since she questioned the main message that Sánchez launched in the debate against the leader of the opposition in the Senate -which marked the beginning of the political course and the main lines of the Moncloa speech--, the spokeswoman avoided confrontation and advocated that the Government continue to govern by focusing "on what is important".

He has also regretted that the Government does not feel accompanied by the main opposition party and has justified that it is a claim that they make on a recurring basis because the PP, both in the time of the previous leader Pablo Casado, and now with Feijóo, have not been on the side of the majority of Spaniards.

Thus, he has described as "disappointing" that they have not supported measures such as free public transport, scholarships for families "in need" or tax rebates on energy that benefit the majority of the population.