Isabel Rodríguez points out that the proposals of the parliamentary groups must be debated. 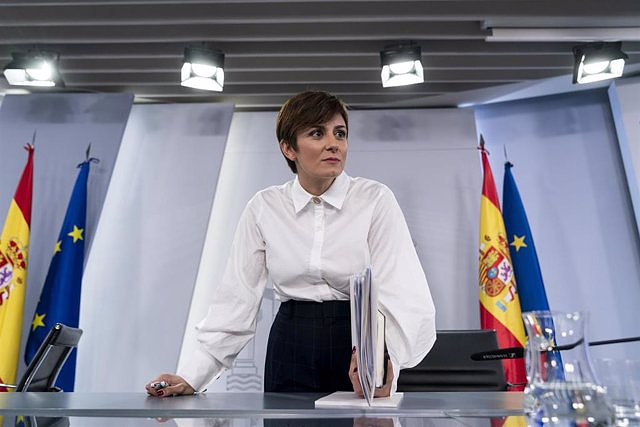 The Government remains open to analyzing the modification of the crime of embezzlement of public funds, as deduced from the statements made today by the Minister of Territorial Policy and Government spokesperson, Isabel Rodríguez, who has said that in the parliamentary framework "there must be debated group proposals.

This is how the minister pronounced herself during the press conference after the Council of Ministers after the journalists addressed 5 questions to find out the position of the Government on reforming the crime of embezzlement in relation to those convicted who have not personally profited.

The journalists have asked him if the Executive's position was to modify this crime or not and because of the statements made by the ERC Spokesman, Gabriel Rufián, who revealed this morning that they were talking to the PSOE about modifying the crime of embezzlement to do it in a "surgical" manner.

The Government spokeswoman has not denied the Republican leader but has not wanted to go further on the modification of the aforementioned crime, ensuring that the Executive has complied with the presentation of a bill to modify the crime of sedition. But that, she has specified, "is not incompatible with the fact that the proposals of the groups must be debated in the parliamentary sphere." "The Government respects Parliament," she exclaimed.

In this sense, he has indicated that the step has been taken to comply with this commitment of the Government when the majorities have been given to carry it out and they are not evaluating "another initiative", but he has indicated the confidence in the parliamentary groups.

And given the journalists' insistence on the Executive's position on whether or not to modify the crime of embezzlement, Rodríguez has pointed out that "the Government cannot rule on the future" or on "the text of future amendments if there are going to be any ".

However, and when asked how this modification could affect cases of corruption, the spokeswoman wanted to reiterate the "known" commitment of the Government in the fight against corruption and in favor of "exemplarity in public life", with the exercise of "permanent transparency" which, as he has said, is a "sign of identity" that makes them feel very proud.

As for the possible date of a new meeting of the dialogue table with Catalonia, after the presentation of the modification of the crime of sedition as included in the agreements of the July meeting, the minister has not specified anything.

He has limited himself to saying that the Government continues to work and has recalled matters of "particular relevance" such as investments in automobiles and semiconductors in which "Catalonia will have a leading role like Galicia or Andalusia." This affirmation has given rise to specify that the Government advances in territorial cohesion and in its commitment to coexistence. Meanwhile, she has reproached that in "one and the other extremes" there are those who prefer "to be in the confrontation".

In addition, he added that the country as a whole should celebrate that today Spain is better than 5 years ago when in 2017 the situation in Catalonia was the second concern of the Spanish according to the CIS. "Today it occupies the 41st position because normality has been restored, there are correct relations between different administrations and harmony has been recovered from politics and thanks to dialogue we have ended a conflict from those years", he exclaimed.