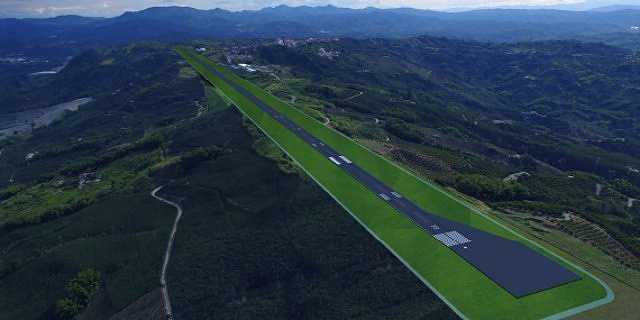 The Government of Colombia has announced this Saturday that it unilaterally liquidates the work contract for the Café Airport, in the Caldas region, about 330 kilometers from Bogotá, the country's capital, for alleged acts of corruption.

The announcement was made after the Colombian newspaper 'El Tiempo' revealed documentation -- letters and conversations -- showing the warnings about the delays of the Spanish company Obrascón Huarte Lain S.A. (OHLA) during the first phase of the work, which consists of the removal of earth to build the runways.

The progress of the work should have reached 50 percent this month, however, according to official documents, it barely reaches 16 percent, reports the newspaper 'El Tiempo'.

Previously, on July 13, OHLA had requested to suspend the contract on the grounds that the million-dollar fines filed for non-compliance "were suffocating them financially." With this Government measure, there is no possibility of resuming the work.

OHLA --formerly OHL-- was awarded the contract to carry out the preparation work for a new airport in March 2021 for 141,108 million pesos (around 34 million euros).

The awarded project proposed the leveling of the land for the construction of the future Café Airport, including the strip of runway up to 80 centimeters above the final grade and the adaptation of the deposits, including the drainage works.

It was the first stage of the construction project for the new airport, which had been declared strategic for the connectivity and economic reactivation of the country and whose total investment was estimated to amount to 532,000 million pesos (124 million euros).

OHL was sanctioned by the National Markets and Competition Commission (CNMC) at the beginning of July for 21.5 million euros, for having altered thousands of public tenders for the construction and civil works of infrastructures over 25 years.

"From the beginning we knew that this contract was going to be a headache, OHL dropped 7,000 million pesos in the offer to win the tender against the other bidder. Where did he intend to recover the money from? Did he intend to keep the tender for the construction of the runway?" questioned Caldas deputy Camilo Gaviria, according to the Colombian newspaper 'Semana'.

The aforementioned newspaper has had access to a conversation by which "the most convenient within the process" would have been chosen. 'SEMANA' has indicated that the Ministry of Transport has not responded to the newspaper's queries.