It is approved that cogeneration plants can benefit from the Iberian mechanism and a new interruptibility mechanism. 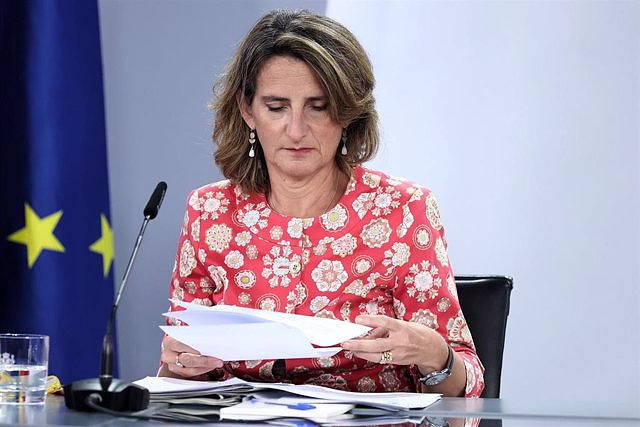 The Council of Ministers has approved this Tuesday the reduction of the VAT rate applied to the receipt of natural gas from 21% to 5%, which will be in force between the months of October and December, although the Government does not rule out the extension of the measure for next year "if necessary".

At a press conference after the Council of Ministers, the third vice president and minister for the Ecological Transition and the Demographic Challenge, Teresa Ribera, indicated that this reduction, included within a royal decree-law and that it will also apply to the purchase of briquettes and pellets, aim to "support domestic consumers and industry in the face of the energy crisis caused by the tension generated by Putin".

The Ministry for the Ecological Transition and the Demographic Challenge estimated that the application of the measure during these next three months will provide total savings, between the gas reduction -190 million euros- and for these ecological substitutes of about 210 million.

This new VAT rate of 5%, the minimum rate authorized by community legislation, will benefit all supplies of natural gas, including those destined for the boilers of neighboring communities. Until December 31, 2022, the reduced rate will apply to intra-community deliveries, imports and acquisitions of natural gas, facilitating access to this supply before the arrival of winter and providing consumers with savings.

In addition, the tax reduction will also apply to pellets, briquettes and firewood, ecological substitutes for natural gas from biomass and intended for heating systems, whose prices have increased considerably with the approach of winter. It will thus provide savings for some 19.4 million to consumers, according to Ministry estimates.

With this new measure, the Government seeks to reduce consumers' heating bills ahead of the arrival of autumn and winter. Thus, in the case of the natural gas receipt, the tax reduction that is already being applied to the electricity bill is equalized.

The Executive has already reduced by 80% the taxes linked to the electricity bill, which has meant savings for taxpayers of around 10,000 million euros.

In this regard, Ribera indicated that, both in the case of electricity and natural gas, the Government "will be aware of how things evolve" for the renewal of fiscal measures on receipts for both consumptions.

Likewise, the Government has also given the green light to the exception so that electricity producers from cogeneration can also benefit from the so-called 'Iberian exception'.

In this way, the cogeneration plants of the industry will be able to temporarily waive their regulated remuneration to enter the scope of application of the Iberian mechanism, thus receiving the adjustment charged by gas thermal plants. This temporary waiver may be requested while the Iberian mechanism is in force.

This measure had been insistently requested by industries such as ceramics, paper or chemicals, among others, which represent 20% of industrial GDP and add up to some 600 cogeneration installations.

In addition, the current situation meant a loss of energy efficiency in the economy, since the energy that cogeneration does not produce is replaced by other technical solutions - combined cycles and gas boilers - that have a lower overall energy performance.

The increase in gas costs has made it necessary to stop many cogeneration facilities, which use the heat from industrial processes to produce electricity, because they did not perceive the adjustment charged by gas plants with the application of the Iberian mechanism; receiving only the wholesale electricity market matching price after applying the mechanism, which is much lower.

Ribera indicated that this measure will allow cogeneration "to reflect the cost of gas in its accounts" and that the park of facilities "will function normally again".

A cogeneration plant produces heat and electricity at the same time in a more efficient way than if heat is generated on one side and electricity on the other, obtaining primary energy savings of around 10%. Therefore, the return to operation of the stopped cogeneration plants will provide savings that can reach 1.2% of the daily gas demand in the best scenario, Ribera said.

This measure is added to others previously approved to support the electro-intensive and gas-intensive industry, such as the 80% exemption in the payment of tolls, the maximization of compensation for the cost of CO2 passed on to electricity, public guarantees for the signing of long-term energy supply contracts or direct payments to companies. Together, the aid adds up to more than 1,000 million this 2022.

In addition, the Executive has approved a new active demand response service that will increase the flexibility and security of the electricity system, thus recovering an interruptibility mechanism.

This mechanism is expected to resolve, with maximum technical efficiency and the least possible environmental impact, situations of significant deviations between generation and consumption that occur in the hourly period immediately prior to the supply, or even at the time of supply.

The service may be provided by demand in exchange for economic income granted through annual auctions, as happened with the old interruptibility system.

Red Eléctrica, as system operator, will manage the new service and will launch the annual auction, in which all demand units -dealers and direct consumers- greater than 1 megawatt (MW) can participate.

The first of the auctions will be held very soon, because the new service must be operational before next November 1, with a view to the winter season.

Likewise, the regulations approved by the Council of Ministers include other measures that will facilitate the growth of renewable generation. Thus, new more flexible criteria are established to determine the capacity of the transmission networks, which may vary in a matter of months, days and hours, always respecting the thermal limits of the installation.

Administrative procedures for generation projects are also streamlined and simplified, such as those related to the identification of legally, economically and technically capable companies, or consultations between different public administrations.