The Government hopes to approve the PGE of 2023 tomorrow, although PSOE and UP negotiate 'in extremis' the last fringes

United We Can insist on not increasing defense spending, repealing the gag law, approving the housing law and a family law. 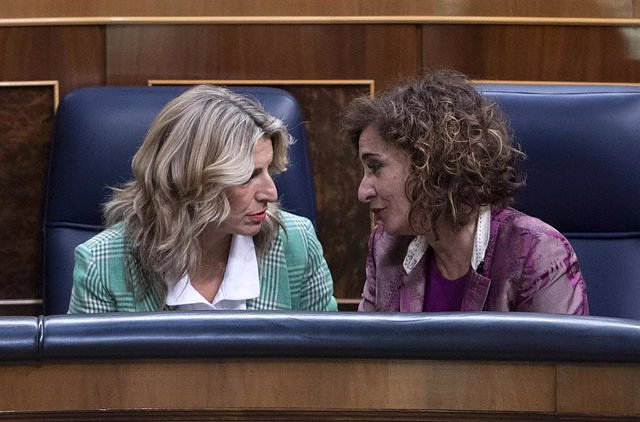 United We Can insist on not increasing defense spending, repealing the gag law, approving the housing law and a family law

The Government expects to approve this Tuesday, October 4, in the Council of Ministers the draft law of the General State Budgets for 2023, although the partners of the Executive continue to negotiate 'in extremis' some "fringes" of which may be the Latest Coalition Accounts.

Despite the pact on fiscal matters after months of negotiations, PSOE and United We Can still "finalize the details" to close the accounts for next year, which aim to consolidate economic growth and job creation, but taking into account the complex current economic outlook, marked by the war in Ukraine and the escalation of prices.

After its approval in the Council of Ministers, it is foreseeable that the Minister of Finance and Public Function, María Jesús Montero, will take them next week before the Congress of Deputies, with the purpose that before December 31 the Budget Law is approved and, therefore, on January 1 enters into force.

Although from United We Can recognize that "progress has been made" in the negotiation of public accounts for next year, leaders of the formation have warned that the increase in the public budget "cannot be" directed at defense spending, but that "should be used for social investment and to reduce inequalities".

Likewise, the 'purple' formation has insisted that the Government must comply with two commitments that it has maintained with citizens "for a long time", which are the repeal of the 'gag law' and the approval of the housing law, in parliamentary process for months.

The family law and its main measures are another aspect pending sealing, given that United We Can demand budgetary support for two specific points, such as extending maternity and paternity leave to six months, as well as a universal child-rearing income of 100 euros.

In the public accounts, the Executive must also include the rise in the salaries of civil servants. The Treasury has offered the unions an improvement of 9.5% between 2022 and 2024 and hopes to close an agreement today.

Officials have already received a 2% salary increase in 2022, to which the retroactive 1.5% proposed by the Treasury will be added, which adds up to 3.5% for this year.

Next year's accounts will also have to deal with updating pensions according to the interannual CPI for the month of November, which could be between 7% and 8%, according to experts, which will mean a very important.

The public deficit would be reduced to 3.9% of GDP, according to the latest Government forecasts, although the Treasury has recently presented a new fiscal package to deal with the current situation, with which it intends to raise an additional 3,144 million euros.

Among the most relevant fiscal measures that will accompany the Budgets, the reduction of the Personal Income Tax (IRPF) for work income below 21,000 euros stands out. The taxation of capital income in personal income tax of more than 200,000 euros will also be raised one point, up to 27%, and for capital gains of more than 300,000 euros, it will be raised to 28%, two more points.

Likewise, income from work from 15,000 euros (1,000 euros more than now) will be exempt from paying personal income tax, while in VAT, the rate will be lowered from 10% to 4% for feminine hygiene products, of which condoms and non-medicinal contraceptives.

Also in this tax, the net yield of modules for the self-employed will rise by 5% and the reduction for deductible expenses that are difficult to justify in taxation under the simplified direct estimation regime will be increased from 5% to 7%.

The fiscal package also includes changes in the Corporation Tax. Specifically, the nominal rate is lowered from 25% to 23% for small companies with a turnover of less than 1 million euros.

Likewise, in this tax, the possibility of compensating the losses of the subsidiaries in the consolidated groups will be limited to 50%, which will affect 3,609 large companies and will be temporary.

All this taking into account that, as in 2020, 2021 and 2022, the European Commission has proposed that the rules that limit the public deficit and debt of the Member States continue to be suspended in 2023. The suspension of the fiscal rules, which it has to be approved by the Government with the approval of the European Commission, it is protected by articles 135.4 of the Constitution and 11.3 of the Budgetary Stability Law.

As has happened in previous years, the Congress of Deputies certified that it appreciates the existence of an exceptional situation that justifies the need to suspend these deficit and debt rules and thus legitimizes the Government's decision, as required by the Constitution and the Budget Stability Law.

‹ ›
Keywords:
Presupuestos GeneralesPSOEConsejo De Ministros
Your comment has been forwarded to the administrator for approval.×
Warning! Will constitute a criminal offense, illegal, threatening, offensive, insulting and swearing, derogatory, defamatory, vulgar, pornographic, indecent, personality rights, damaging or similar nature in the nature of all kinds of financial content, legal, criminal and administrative responsibility for the content of the sender member / members are belong.
Related News