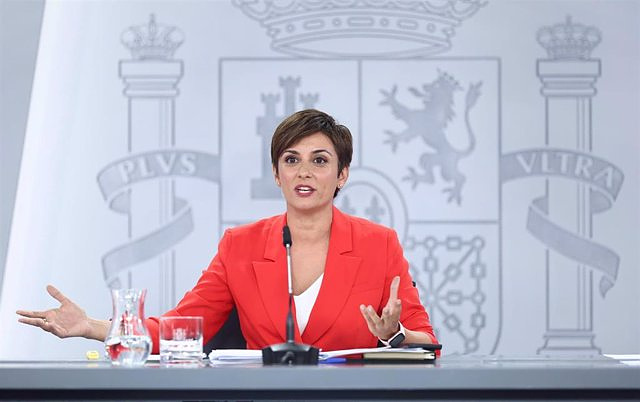 The Government spokesperson and Minister of Territorial Policy, Isabel Rodríguez, recalled this Tuesday that the reflection made today by Minister José Luis Escrivá, betting on centralizing taxes to avoid competition between autonomous communities, is a "personal opinion", as he himself has made clear in making these statements.

"I have nothing to clarify about it because he himself has clarified it," stressed the spokeswoman during the press conference after the Council of Ministers.

In fact, the spokeswoman has underlined that the Executive's intention is to address any progress on taxation in Spain "hand in hand with the regional financing model".

"It is in this context that agreements must be reached that respect the sphere of competence and at the same time guarantee standards of equal rights for Spaniards, wherever they live," Rodríguez pointed out.

The Minister of Inclusion, Social Security and Migration, José Luis Escrivá, has been in favor of centralizing taxes to avoid the "nonsense" of the autonomous communities competing with each other in fiscal matters.

Escrivá, in statements to Onda Cero reported by Europa Press, made it clear from the outset that this was an opinion "in a personal capacity", which he had already defended in the past, before becoming minister, and which is due to the decision of the Junta de Andalucía to abolish the Wealth Tax, following in the footsteps of the Community of Madrid.

"In Spain we are very installed in this transfer of taxes that has a long tradition, but that I, personally, do not like and that generates these drifts as undesirable as the ones we are seeing these days", the minister stressed.

Government sources have clarified that it is not on the table to centralize taxes and thus withdraw powers that the autonomous communities currently enjoy.

‹ ›
Keywords:
Escrivá
Your comment has been forwarded to the administrator for approval.×
Warning! Will constitute a criminal offense, illegal, threatening, offensive, insulting and swearing, derogatory, defamatory, vulgar, pornographic, indecent, personality rights, damaging or similar nature in the nature of all kinds of financial content, legal, criminal and administrative responsibility for the content of the sender member / members are belong.
Related News