The Government has already launched the bulk of the agreements of the Dialogue Table, but the Government also asks to change embezzlement

In the document it was agreed to "dejudicialize" but without specifying the reforms, although the Government has begun to suppress sedition. 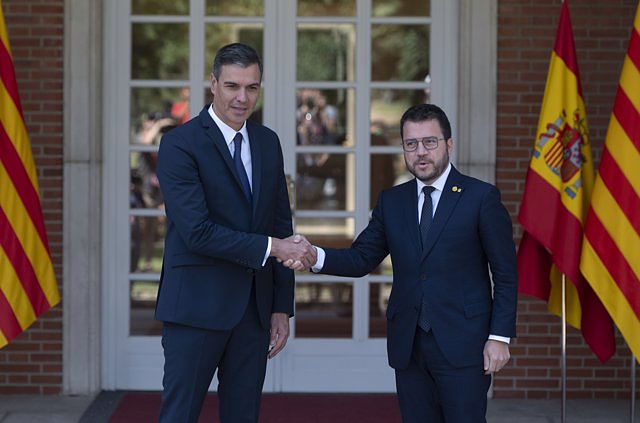 In the document it was agreed to "dejudicialize" but without specifying the reforms, although the Government has begun to suppress sedition

The Government has already begun to implement a large part of the agreements reached with the Government at the Dialogue Table meeting last July, both in terms of "dejudicialization" and the promotion of Catalan. However, from the Catalan Executive they consider that these commitments must also include the modification of the crime of embezzlement of public funds.

Two documents came out of the meeting on July 27, one of them contained the commitment to dejudicialization, but without specifying how it would be carried out, and also a guarantee on "the assets of the people", in reference, although without expressly citing it, to the bail imposed by the Court of Auditors for the participants in the 'procés'.

The other three-page document included numerous commitments for the Government to promote the use of Catalan in different forums, in addition to committing to support the new regulatory framework approved by the Catalan Parliament so as not to give effect to the ruling that forced them to apply the 25 percent of the Spanish language in the classroom.

Well, the vast majority of the commitments have already been put in place by the Government, although the interpretation made by it and the Generalitat include some differences on how dejudicialization should be.

The text of the agreement speaks of "the commitment to gradual and concrete advances" that "must be specified in legislative, normative, regulatory or any other reforms to overcome judicialization and its effects, also taking as a reference the best European standards and recommendations and international".

In other words, the agreement did not specify what those legislative reforms should be. The Government has understood that this commitment to dejudicialize is fulfilled, for the moment, with the suppression of the crime of sedition, replacing it with another called 'aggravated public disorder'. Alleging that in this way they fulfill the promise made by the President of the Government, Pedro Sánchez, in the investiture debate.

The truth is that Sánchez did not mention the suppression of the crime of sedition in that debate, but merely spoke of "dejudicializing". A promise that has now been translated into the abolition of the crime of sedition to "adapt it to the standards of the Penal Codes" of other more developed European countries, as members of the Government and the PSOE repeatedly argue.

In that first document of July 27, the Government also promised to reinforce fundamental rights "ensuring that public institutions preserve the general interest and adopt the maximum guarantees, especially when their actions may have an effect on the rights and freedoms or people's assets.

Nor was it specified here what heritage and what people were being talked about, but it is taken for granted that it affects the pecuniary sanctions established by the Court of Accounts for the participants in the procés, given that the Supreme Court's condemnation of the pro-independence leaders it was also for embezzlement of public funds.

Prior to the signing of this agreement, the State Attorney already resigned in January to appear in the case where the alleged irregular use of public funds for 1-O, the so-called 'Catalan embassies' and the Public Diplomacy Council will be prosecuted of Catalonia --known as Diplocat--.

In addition, the Prosecutor's Office had also lowered in April the accounting responsibility for these events. Thus, he estimated it at 3.4 million euros compared to the 9.5 that the Court of Auditors had initially established. Along with this, the Public Ministry also requested, and the Court of Accounts agreed, to remove 16 ex-charges --including former directors Joaquim Forn and Josep Rull-- from the list of people who are being claimed, as of accounting responsibility, the funds presumably diverted by the Generalitat in the 'procés'.

The Government and the Generalitat agreed in this document that the legislative amendments would be approved before the end of the current session of Parliament. With which the Executive complies with these agreements since it has presented the reform of the Penal Code, suppressing the crime of sedition, before the end of the year.

Although for the independentistas this proposal falls short, since the president of the Generalitat himself has also demanded to address the reform of the crime of embezzlement or other types for which they have also prosecuted independence leaders, including Oriol Junqueras.

"Today we take a very important step and more will have to be done. We remain committed to achieving the effects of the amnesty," he said last Friday while again proposing a self-determination referendum.

In the second document, the parties agreed to promote Catalan in Europe, in international organizations and in the Legislative Chambers, starting with the Senate. In addition, the Government expressly supported the development of the new regulatory framework approved by the Parliament of Catalonia that eluded the application of the ruling that required 25 percent of Spanish to be taught in education.

One of the agreements was that the Government of Spain would ask the Presidency of the European Parliament to consider Catalan as the language of use in plenary for the purposes of exercising the right of petition before the institution.

This request was made in September by the Executive of Pedro Sánchez to the European Parliament, as recognized by the president of the institution, Roberta Metsola, in an interview with Europa Press, in which she explained that the European Parliament was studying all the possibilities regarding the use of Catalan, Galician and Basque during the plenary sessions, after the Government sent a letter to Strasbourg in September to request their admission as languages ​​of use in the hemicycle.

On September 16, there was also a meeting between the Minister of Culture of the Government of Catalonia, Natalia Garriga, and the Minister of Territorial Policy, Isabel Rodríguez, in which the Catalan proposed a work plan that guarantees that the administration of the State attends in Catalan in Catalonia. A commitment that also appears in the agreement of July 27.

Another of the commitments was to promote in the present Legislature the regulatory reforms in the General Courts to expand the use of the co-official languages. "In this sense, it will begin by promoting the revision of the Senate Regulations to expand this right in the Upper House," the document specifies.

Currently, the use of the co-official languages ​​is allowed exclusively in the Senate for debates on motions and for interventions in the General Commission of the Autonomous Communities, although a Junts proposal is being processed to reform the Regulations and extend the use of Catalan, Basque and Galician in all parliamentary debates.

However, the Socialist Spokesperson in the Senate has specified, in an interview with Europa Press, that the use of co-official languages ​​will increase, but has clarified that it will not be "universalized".

The Executive also promised to guarantee the financing to carry out the agreements, in addition to including the linguistic perspective in the normative projects and facilitating that the Generalitat send representatives to international forums that deal with policies with linguistic dimensions.