The Government avoids drawing red lines to negotiate the Secrets Law, including the 50-year term

Robles accepts that the negotiation with other parties can modify the number of years of classification or "the nature of the issues". 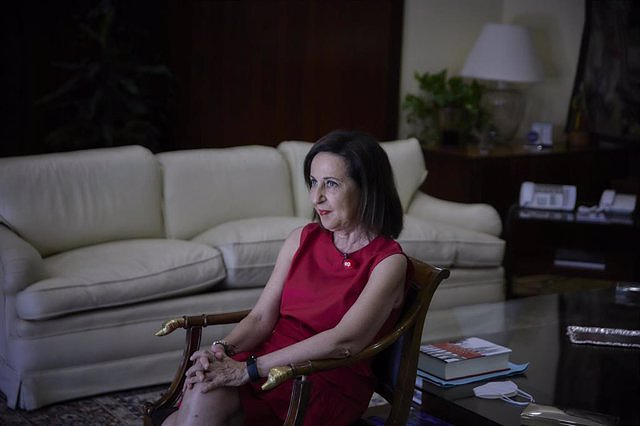 The Government will avoid drawing red lines for the parliamentary negotiation of the new Classified Information Law that will replace the Official Secrets Law of 1968 and insists on its calls to add the greatest possible consensus, for which it is open to negotiating even the deadline of 50 years imposed for the declassification of the most confidential documents.

The draft bill approved this Monday by the Council of Ministers marks the maximum period of 65 years during which information may remain secret. Specifically, for documents classified as top secret, a term of 50 years is set, extendable for another 15; the secret information will be for 40, plus ten extension; the confidential between seven and ten years and the restricted between four and six.

These deadlines, added to the creation of the figure of an authority in charge of deciding on the declassification that falls on the Ministry of the Presidency, has garnered criticism from the entire opposition, starting with United We Can, a government partner.

For this reason, from the socialist wing of the Executive, messages have been reiterated this week reminding that it is only the first step of the Law and it is necessary to reach a final text that satisfies most of the political arc so that it is lasting in the future. weather.

"It is an absolutely essential law, we were with a text from 1968, it was a NATO requirement and also citizens have to know their own history," remarks the Minister of Defense, Margarita Robles, in an interview with Europa Press.

In this sense, Robles rejects any debate on the power that the Law grants to each Ministry and insists that the important thing is to advance on a text that came from the Franco regime to facilitate knowledge of relevant events in the history of Spain.

She places special emphasis on the case of the GAL, in whose fight she was directly involved as Secretary of State for the Interior in the 1990s. documents such as those that refer to the GAL. Or to 23-F", he acknowledges.

For this reason, it does not close the door so that the debate in Congress can reduce the time that would be needed for the declassification of these documents, since according to the current wording there would still be two decades left to know the information on the GAL. "That is why there must be several amendments in the parliamentary procedure that can come from the number of years or also the nature of certain issues," he accepts.

Robles insists that the legislative text must combine national security with the right of citizens "to know their history." And he stresses that "the most important thing" is that it achieves "the maximum parliamentary consensus." "I am sure that all the progress that remains to be made in this Preliminary Bill will be improved and in Parliament there will be all kinds of amendments that will help improve it," she insists.

However, she says that there has still been no contact with the opposition and neither has she spoken with anyone from the Popular Party to address the matter, unlike other occasions on issues related to Defense. In any case, she is "sure" that the 'popular', "as a State party", will make their contributions like the rest of the parties to achieve a text "with a vocation for the future".

"What the Government is clear about is that it was an absolutely essential, necessary Law, that we cannot be with a law of Francoism and we have to have a model comparable to that of other countries of the European Union and NATO", ditch.

The same message was conveyed this Wednesday by the Secretary of State for Justice, Tontxu Rodríguez, who acknowledged that the declassification deadlines included in the Preliminary Draft are those that were marked in the Council of Ministers but "everything is negotiable" and there is the possibility that the parliamentary negotiation modifies them.

In any case, he insisted that its approval is "absolutely essential" because it is one of the few laws that survive from the Franco regime and "there are pages of the history of Spain that it is good for society as a whole to know."

Despite this, the Minister of the Presidency, Félix Bolaños, described these deadlines as "reasonable" when he presented the draft after its approval by the Council of Ministers. As he explained, in Europe there are countries that do not set any time period for the publication of this type of document, such as Denmark, France, Italy or Belgium; while in Sweden, for example, it is set at 70 years, and in Germany at 30 for top secret, secret and confidential.

In addition, alternatively, information may be classified based on certain or foreseeable future events such as the end of a war or the death of a person.