The Government approves the right to unemployment benefits for domestic workers: "Spain is a better country"

Employer families will be entitled to a bonus of 80% in business contributions to the unemployment contribution. 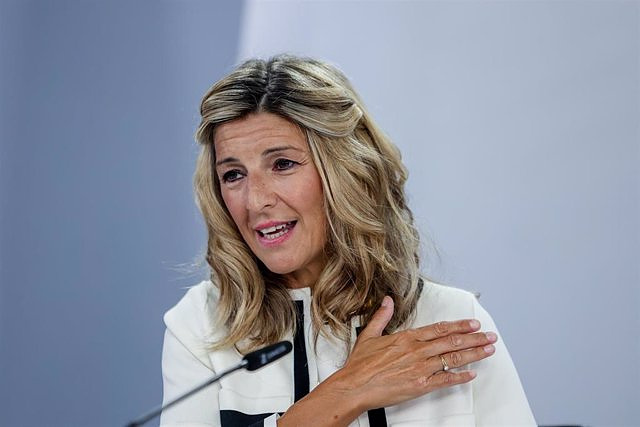 The Second Vice President of the Government and Minister of Labor and Social Economy, Yolanda Díaz, celebrated on Tuesday the approval in the Council of Ministers of the decree that, among other measures, grants domestic workers the right to unemployment benefits. In her opinion, this initiative is the "most important" launched by her department in the legislature, because, as she has indicated, with it "Spain is a better country."

During the press conference after the Council of Ministers, Díaz indicated that this initiative "places the welfare of those who, until today, have been largely forgotten" such as "working women most vulnerable" and lamented that it was necessary to wait for the "first third of the 20th century" for these professionals to "conquer their rights in the full sense".

In this way, he explained that, thanks to this decree, domestic workers not only have access to unemployment benefits, but also to "all the assistance benefits available today in the labor legal system", giving them, for example, also coverage in the Salary Guarantee Fund (Fogasa) in case of insolvency; or they are incorporated into occupational risk prevention.

On this last point, the Minister of Labor explained that domestic workers have "a nuance" that has to do with the fact that their employers are families and, therefore, "they are not ordinary" but rather have "a relationship of a special nature", as well as the fact that his work is carried out in a home.

In this sense, he pointed out that an additional provision has also been included in the text to develop the study of occupational diseases which, as he explained, will have a gender bias for this group.

Díaz has also highlighted that with the new decree, withdrawal is expelled from the legal system and professionals are given "ordinary protection in case of dismissal", in addition to incorporating other rights such as information or the formality of written contracts. In addition, measures are included to address training.

On the other hand, the second vice president has pointed out that the measure put in place by the Government has a "transversal" character, so that it also keeps an eye on families, maintaining bonuses and aid for them, but launching a new bonus to which employers will be entitled and which represents 80% of business contributions to the unemployment contribution and to FOGASA in this Special System.

On this subject, he has also pointed out that, within 6 months and together with the Minister of Inclusion, Social Security and Migration, José Luis Escrivá, he will formalize a new regulation with the new family typologies and income and assets requirements for the deployment of this measure.

"This rule is feminist," the Minister of Labor pointed out, before pointing out that the domestic employment sector is made up "95%" of women.

In his speech, he also expressed his concern because there is a part of this work that is "highly aged" because, as he explained, 130,000 of the 373,000 female employees that are recorded in Spain are over 55 years old, while so only 17,000 are under 30 years of age.

In this 'photograph' of the sector that he took in his speech, Díaz also highlighted that 44% of the female workers are foreigners, while in the rest of the sectors the average for this group is 10%, and that the nationalities that predominate are Colombian, Romanian and Honduran.

In addition, he has pointed out that there is an unequal distribution in the territory, concentrating mostly in Madrid, at 27%, despite the fact that, as indicated by the vice president, its population profile in this region is 14%. Díaz explained that this is a consequence of the fact that their days are less than 60 hours and most of them work partially.

‹ ›
Keywords:
Consejo De MinistrosYolanda Díaz
Your comment has been forwarded to the administrator for approval.×
Warning! Will constitute a criminal offense, illegal, threatening, offensive, insulting and swearing, derogatory, defamatory, vulgar, pornographic, indecent, personality rights, damaging or similar nature in the nature of all kinds of financial content, legal, criminal and administrative responsibility for the content of the sender member / members are belong.
Related News