The meeting between Ribera and Bravo closed this Monday and takes place 10 days after the PP sent its energy plan to the Executive. 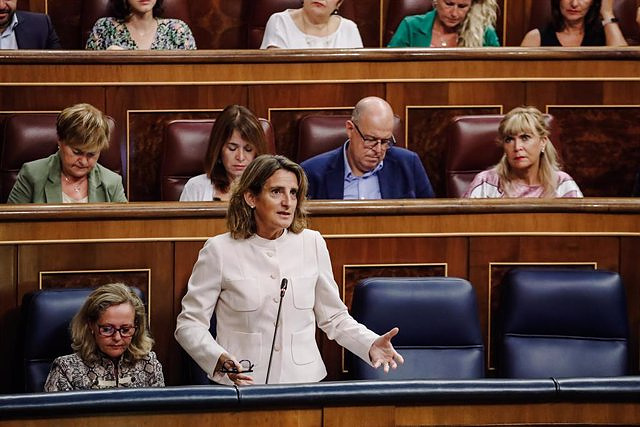 The third vice president of the Government and minister for the Ecological Transition, Teresa Ribera, and the head of Economy of the PP, Juan Bravo, will meet this Thursday to negotiate energy measures, according to what 'popular' sources have informed Europa Press.

The meeting between both teams will take place as a result of the energy plan that the first opposition party sent to the Executive on September 12. A day later, the Plenary Session of Congress admitted for processing - with the Popular Group voting against - the proposed law of PSOE and United We Can to establish a temporary tax on large energy companies and banks.

In fact, PP sources point out that this meeting takes place within the framework of the forced modification of the Government's project "motivated by the differences between its plan and that of the European Commission." The 'popular' maintain that the rate that Brussels raises for energy companies is "diametrically opposed" to that of Pedro Sánchez, since what the Government is taxing is the billing of a company, not the benefits.

Ribera and Bravo already had a WhatsApp exchange at the end of last week and agreed to see each other shortly. This Monday afternoon they finally closed a meeting, which will take place this Thursday, September 22.

The energy "rescue" plan of the PP for families and companies based on energy saving proposes, among other measures, the creation of an energy AIREF, reviewing the formula for setting the price of energy, simplification of taxation on the electricity bill and the savings bonus achieved by families and companies, as well as not giving up any source of energy emissions --nuclear extension, cogeneration and green hydrogen--.

Feijóo accompanied this energy plan with a letter to the President of the Government on September 12 in which he expressed his willingness to discuss these measures and even negotiate their implementation. In his opinion, the "gravity of the moment" requires "swift responses, courageous measures and everyone's responsibility."

After assuring that the decisions adopted today in energy matters will mark the lives of Spaniards, not only in the coming months but in the coming decades, Feijóo is convinced in that letter that "it is worth the Government agreeing with the alternative to a State policy" in order to achieve reforms that give citizens a "more affordable, sustainable and competitive energy in the present and the future.

The PP Deputy Secretary of Economy himself, when presenting his party's document, already said that what they are proposing are measures that will be able to fix Spain's energy position in the next 15 or 20 years and they need consensus. "These are exceptional situations that require exceptional measures," he proclaimed.