The Funcas Panel maintains growth for this year at 4.2%, but cuts six tenths that of 2023

Raises the average inflation rate to 8. 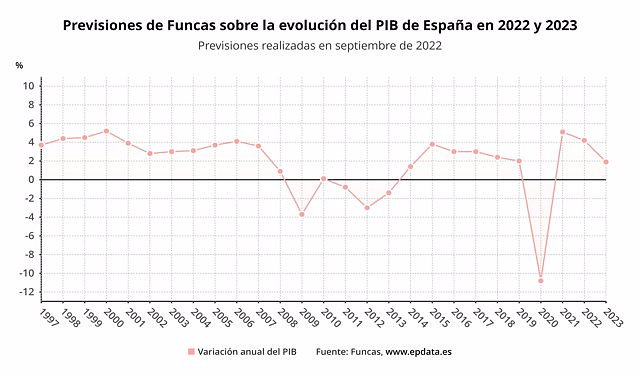 Raises the average inflation rate to 8.6% this year and 3.8% next year

The Funcas Panel has maintained the growth estimate for this year at 4.2%, but has cut the forecast for 2023 six tenths to 1.9% due to the worsening of the economy in the second half of this year .

Specifically, the panelists expect weak growth of 0.1% in the third quarter, after the rise of 1.1% in the second, and a drop of two tenths in the fourth quarter, with the majority of analysts expecting a negative result in the last three months.

In this context of "deterioration and turbulence" for the world and European economy, analysts affirm that inflationary pressures will persist. Thus, after increases of more than 10% in June, July and August in year-on-year terms, Funcas experts expect a moderation in inflation in the remaining months of the year due largely to base effects.

Even so, the forecast for the average annual inflation rate for 2022 rises seven tenths, to 8.6%, while that corresponding to core inflation increases by four tenths, to 5%.

As for 2023, the consensus forecast has been revised upwards to 3.8% for both headline and core CPI. The forecast year-on-year rates of the general index for December 2022 and December 2023 are 7.5% and 2.4%, respectively.

Regarding the evolution of the labor market, the average annual unemployment rate will continue to fall, to 13.3% in 2022 -two tenths less than the previous Panel- and 13% in 2023 -one tenth less-.

Finally, the panelists expect a reduction in the public deficit in 2022 and 2023. The negative balance of public accounts would be 5.2% of GDP this year and 4.6% next year, more pessimistic forecasts than those of the Government and the of the Bank of Spain.

The accelerated withdrawal of monetary stimuli in the face of the increasingly palpable risk of second-round effects on domestic prices and wages has caused the panelists to sharply revise their interest rate forecasts upwards. Specifically, the ECB's deposit facility would be close to 1.5% at the end of the forecast period, half a point more than in the previous consensus.

The Euribor has also been revised by a similar magnitude to 2.3%, while the yield on the 10-year bond would exceed 3.1%, one tenth more than in the July Panel.

‹ ›
Keywords:
Funcas
Your comment has been forwarded to the administrator for approval.×
Warning! Will constitute a criminal offense, illegal, threatening, offensive, insulting and swearing, derogatory, defamatory, vulgar, pornographic, indecent, personality rights, damaging or similar nature in the nature of all kinds of financial content, legal, criminal and administrative responsibility for the content of the sender member / members are belong.
Related News