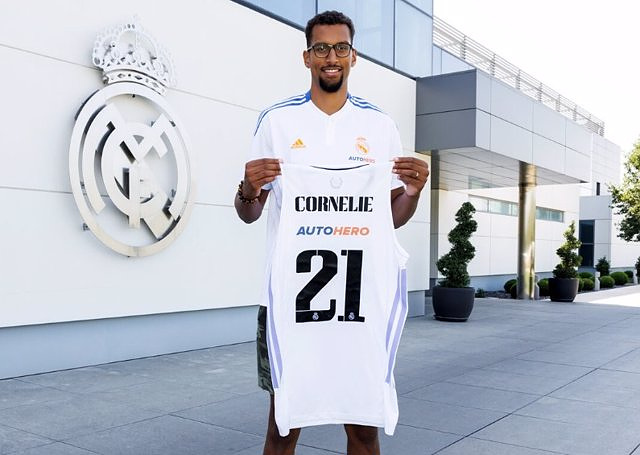 Real Madrid basketball confirmed this Wednesday that it has reached an agreement with French power forward Petr Cornelie, who arrives from Grand Rapids Gold of the American G-League and has signed for the Madrid team for one season.

According to Real Madrid, the man from Calais "stands out for being an excellent rebounder, with a good three-point shot and versatile" and in his last season in the NBA development league he averaged 17.8 points and 12.8 rebounds per game in the Grand Rapids Gold, a team affiliated with the Denver Nuggets, who chose him in the 2016 'Draft'.

Cornelie trained in the lower categories of Le Mans in his country, with which he was chosen 'Best Young' of the French League for the 2014-2015 season. After passing through Levallois Metropolitans and a return to his first club, he signed for Pau Orthez, where his performance allowed him to make the leap to the NBA. In addition, he was part of the team that was proclaimed Olympic runner-up last summer in Tokyo.

"Arriving at Real Madrid is great news for me. It's a great experience and a great opportunity to get to the next level. That was one of my big goals, to be a player at the best level and that's why participating in the Euroleague is a challenge for me. To be able to play for Real Madrid, a team fights to win it, it's great," Cornelie stressed in an interview with the official Madrid media.

The Frenchman aspires to "be competitive" and show that he can "play very well at this level" in what he considers "a great challenge" personally. "Obviously, having the opportunity to play here is great, I couldn't turn down a call like that. It's great to be able to play and compete to win the Euroleague and the Endesa League. It's a great opportunity for me," he stressed.

"I can bring a lot of energy, my height, my physical ability and my three-point scoring. I'm capable of grabbing a lot of rebounds and going down the court quickly. My main goal is to be better this season, to keep growing, I'm going to try to show my best version and win trophies", explained the power forward.

Cornelie will meet compatriots such as Fabien Causeur, Guerschon Yabusele and Vincent Poirier. "It is good to have all these French players that I know, to be able to talk and interact with them. This is one of the reasons why I have signed with the club. I spoke with them and they told me that when you arrive here you don't want to leave anymore." , commented.

"They are very happy because Madrid is a great city and this is a great club. Every season you play to be champion in Spain and in Europe, it's a very competitive team, so it's great to be here. They love all this, so they told me I was going to love it," he said.