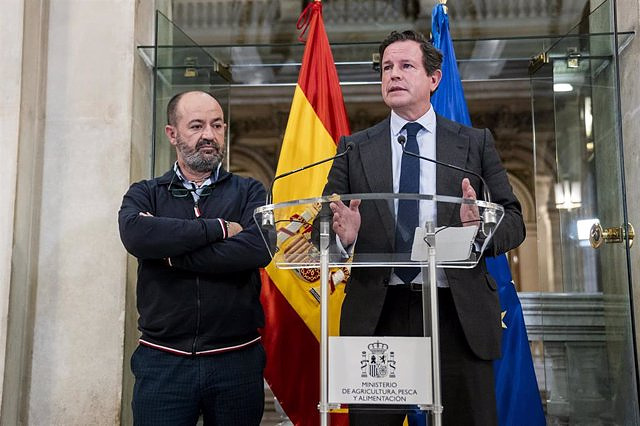 The fishing sector has rejected the proposal to put a cap on the price of staple foods and has called for a reduction in VAT on fish to control prices and deal with inflation.

"The Government, what it would have to do if it really wants to help citizens and the fishing sector, is to reduce the VAT on fish and lower it to the super-reduced VAT as it exists on other basic products and not affect the freedom of the market and competition. that exists in Spain", stated the general secretary of the Spanish Fisheries Confederation (Cepesca), Javier Garat.

Likewise, the fishing sector has once again requested a guarantee of legal certainty for its companies before the Commission for Agriculture, Fisheries and Food of the Congress of Deputies, in which Garat has appeared.

In his speech, which is part of the processing of the Sustainable Fisheries and Fisheries Research Bill, Garat invited politicians to take advantage of the opportunity that this procedure represents to broaden their knowledge of a sector "in which Spain can boast of being at the head of the European Union, and of an essential and strategic activity committed to supplying healthy food to the population, even in the most complex scenarios".

During his speech, Garat has asked the political groups for a "constructive" spirit and the maximum effort to agree on the text of the Law, accepting the proposals for amendments put forward by the fishing sector represented by Cepesca.

Garat has also pointed out in the Congress of Deputies that the proposal, in its current version, does not guarantee the legal certainty of fishing companies, since it is not made explicit that the possible new criteria for the distribution of fishing opportunities will not affect those already carried out in accordance with to the current law.

Garat has drawn attention to the fact that the sector has been governed by a specific division for two decades (Fishing Law of 2001) that has defined the operating structure and investments of fishing companies, mostly family-owned, and that not respecting it would mean a scenario "unstable" that would undermine the legal certainty to which any business activity is entitled, putting thousands of jobs at risk.

In addition, the solvency of the shipowners would be modified and their access to credit would be difficult.

Garat has highlighted that some of the fishing possibilities have been acquired with his own funds, but also with bank loans and that, in the latter case, the financial system takes as a reference and sometimes as a guarantee, the valuation of the asset, in this case the fishing quotas.

Therefore, according to Garat, its modification would negatively condition the following operations and would condition them in the future.

For this reason, the general secretary of Cepesca has requested that it be stated "expressly and clearly" that the distribution of fishing opportunities prior to the entry into force of the bill remain fully valid.

"If there is no legal certainty, the system collapses," added Garat.

‹ ›
Keywords:
EPAgro
Your comment has been forwarded to the administrator for approval.×
Warning! Will constitute a criminal offense, illegal, threatening, offensive, insulting and swearing, derogatory, defamatory, vulgar, pornographic, indecent, personality rights, damaging or similar nature in the nature of all kinds of financial content, legal, criminal and administrative responsibility for the content of the sender member / members are belong.
Related News