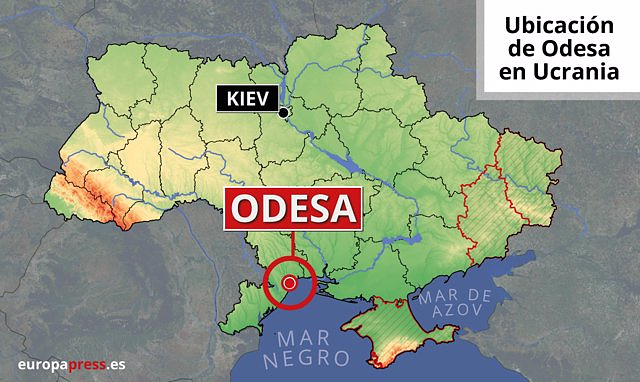 A ship loaded with grain left the Ukrainian port of Odessa (south) on Monday for the first time since the start of the war in Ukraine, triggered on February 24 by the invasion order given by Russian President Vladimir Putin, according to Turkish and Ukrainian authorities have confirmed.

The Turkish Ministry of Defense has indicated in a statement on its account on the social network Twitter that the ship has started its journey at 8:30 a.m. and has added that it will go to the Lebanese port of Tripoli, from where it will go to Istanbul during the day of the Tuesday.

For his part, the Minister of Infrastructure of Ukraine, Oleksander Kubrakov, confirmed in a message on his account on the social network Facebook that "the first ship with Ukrainian food has left the port of Odessa." The ship is the 'Razoni', flying the flag of Sierra Leone.

Thus, he explained that the ship "will travel through a corridor whose security has been confirmed by the guarantor partners: the United Nations and Turkey." "There are 26,000 tons of Ukrainian grain on board", he pointed out, before recalling that "Ukraine is the fourth largest exporter of grain in the world, so the possibility of exporting it through ports is a colossal success to guarantee security world food".

The announcement comes less than a week after the Turkish authorities inaugurated the Istanbul coordination center for the export of grain from Ukraine, within the framework of the agreement reached by the Russian and Ukrainian authorities, with the participation of the United Nations.

The agreement went ahead after the parties agreed to a UN-sponsored plan to form a coordination center in the city of Istanbul with the aim of carrying out joint inspections at port entrances and exits and guaranteeing the security of the routes.

In this regard, the ships are expected to cross the Black Sea to the Bosphorus Strait in Turkey, where the joint coordination center is located. Said center will be in charge of examining the ships that enter Ukraine to guarantee that they do not carry weapons or combat material.