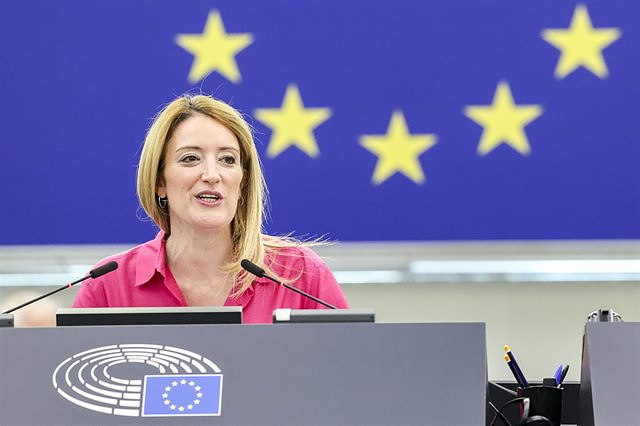 The president of the European Parliament, Roberta Metsola, has indicated this Thursday that the institution will help Ukraine in "every step" of its candidacy to join the European Union, although it has recognized that the process may not be "easy".

"The granting of candidate status to Ukraine on June 23 confirms our commitment to walk side by side towards its full membership of the European Union. It may not be easy, but the European Parliament, its biggest supporter, is at your disposal. to help you every step of the way," Metsola told the Ukrainian Parliament in an appearance by videoconference.

"Ukraine's national day is always important, but this year, the anniversary has acquired an even more important meaning", added the president of the European Parliament in her speech, who has shown her desire that "the bond as Europeans" be " formalize soon".

The President of the European Parliament has promised to dedicate "all available resources, energy and knowledge" to help the Ukrainian Parliament and has praised the role of the institution for the "stability of any democracy".

Metsola has pointed to the "opportunity to transform Ukraine" to make it more "modern", "sustainable" and "resilient" and has appealed to use the resources of the private sector and "frozen assets" to Russia for this purpose.

On June 23, the leaders of the European Union granted Ukraine and Moldova the status of candidate to join the European bloc. This is an unprecedented decision since it implies accepting the candidacy of a country at war, following the opinion of the European Commission that endorsed taking this step assuming that both countries will undertake far-reaching reforms.

‹ ›
Keywords:
UcraniaParlamento EuropeoUE
Your comment has been forwarded to the administrator for approval.×
Warning! Will constitute a criminal offense, illegal, threatening, offensive, insulting and swearing, derogatory, defamatory, vulgar, pornographic, indecent, personality rights, damaging or similar nature in the nature of all kinds of financial content, legal, criminal and administrative responsibility for the content of the sender member / members are belong.
Related News