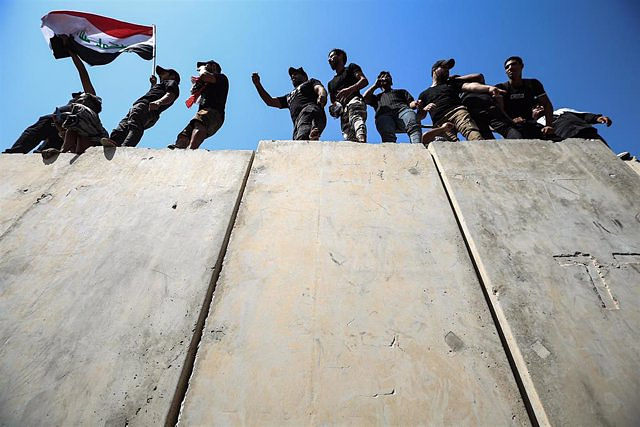 The European Union has communicated this Sunday its concern about the new wave of protests on Saturday in Iraq led by supporters of the powerful cleric Muqtada al Sadr and has asked the Iraqi forces to conclude their stalled government negotiations, key to this latest crisis, in accordance with the terms of the Magna Carta.

"The EU is concerned about the ongoing protests and their possible escalation in Baghdad. We urge all parties to exercise restraint to avoid further violence," Brussels said in a statement.

A total of 125 people, including 25 members of the Iraqi security forces, were injured on Saturday, the day Al Sadr's supporters seized Parliament for the second time this week and brought the Iraqi capital Baghdad to a standstill in protest at the candidacy of the pro-Iranian Shia politician Mohamed al Sudani, rival of the religious, to the position of prime minister.

Faced with this scenario, the EU "invites the political forces to solve the problems through a constructive political dialogue within the constitutional framework", adds the note, which ends by recalling the "right to peaceful protest" although always from the "respect to state laws and institutions.

The cleric, whose Sayyrun coalition won the legislative elections last year, has spent months denouncing the inability of the rest of the political forces to form a new government, and has assured that the pro-Iranian group to which the candidate Al Sudani belongs, Marco de Coordinación, a large defeated in the elections, should not have a presence in the new Executive.

However, and after the resignation in June of the Sadrite parliamentary bloc due to the blockage in the negotiations, the pro-Iranian group decided to take a step forward and present the former Minister of Labor and Social Affairs as a candidate.

Iraq is already going through its longest period of government negotiations since the first elections held in 2005 under the auspices of the United States, a situation that has led both the population and the country's political class to a state of permanent frustration and prevented the OPEC's second largest oil producer to reap the corresponding benefits from rising crude prices.

‹ ›
Keywords:
IrakUE
Your comment has been forwarded to the administrator for approval.×
Warning! Will constitute a criminal offense, illegal, threatening, offensive, insulting and swearing, derogatory, defamatory, vulgar, pornographic, indecent, personality rights, damaging or similar nature in the nature of all kinds of financial content, legal, criminal and administrative responsibility for the content of the sender member / members are belong.
Related News