Don Juan Carlos only reappeared in public for the funeral of Isabel II and has not ruled on Corinna's podcast. 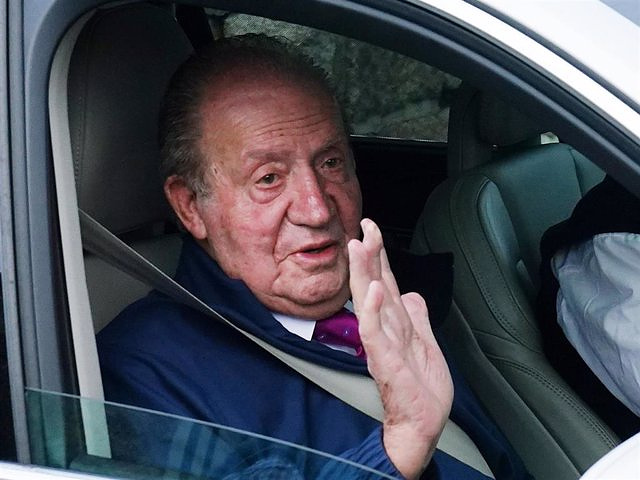 The visit that the King emeritus made to Spain six months ago has marked a before and after in his way of living his exile in the United Arab Emirates (UAE), since before it was frequent for him to make public his discontent and his desire to return to Through his most intimate circle since his time at the Palacio de la Zarzuela, the law of silence has been imposed.

Don Juan Carlos returned to Abu Dhabi, where he has established his permanent residence for the moment, on May 24 with the forecast of returning to Spain in less than a month to attend a regatta again, but that visit did not take place and since So it has not transpired at any time that he intends to travel to Spain.

Not even in recent weeks and given the proximity of a designated date such as Christmas, especially when in previous years, especially in 2020, months after moving to the UAE in August, he actively and passively made known his desire to be able spend the holidays with the family in Spain.

Although from the Casa del Rey they have not wanted at any time to go into details about what was discussed between Felipe VI and his father in the private meeting they held on May 24 in Zarzuela, it seems that the message that the now monarch received from his son has penetrated in Don Juan Carlos.

Then, Zarzuela indicated that both had had the opportunity to address "family issues as well as various events and their consequences in Spanish society" since the emeritus moved to the Gulf country, apparently alluding to the discomfort surrounding the activities of the former monarch who were the object of judicial investigation.

In its statement at the end of the eleven-hour visit, the Casa del Rey revealed its discomfort at the way in which Don Juan Carlos's first visit to Spain had gone, which since he landed in Vigo and throughout his stay in Sanxenxo Before traveling to Madrid, he was followed by a multitude of media and whose movements were also the object of great interest among citizens.

Thus, they reminded him that in his letter to Felipe VI in March, in which he conveyed his desire to be able to travel to Spain on time, he had informed him of his decision "to organize his personal life and his place of residence in areas of a private nature " when he returned with a view to being able to continue enjoying "the greatest possible privacy", repeating word for word the content of the letter.

Since then, the one who was king for almost four decades has maintained a much lower profile than he had in the first stage of his exile in the Emirates, where he is hosted by the now president of the country, Mohamed bin Zayed, and has not let see in public, except on a single occasion.

This was none other than the funeral of Queen Elizabeth II. Don Juan Carlos was invited by the British Royal House in his capacity as former Head of State and did not decline the invitation, since he and the deceased were great-great-grandchildren of Queen Victoria of England, as was Doña Sofía and the Duke from Edinburgh.

The emeritus traveled to London by his own means while Felipe VI and Queen Letizia, like Queen Sofía, traveled on an official plane. Once there, father and son met again, although without the presence of the press, during the reception offered by Carlos III at Buckingham Palace the afternoon before the funeral, on September 18. Doña Letizia and Doña Sofía were also present at said act.

The big surprise was that the Kings were seated next to the emeritus at the funeral that was held the following day at Westminster Abbey, after it had been assumed that both would be separated since Don Felipe was a head of state. .

However, the British Royal House made the reason of consanguinity prevail and placed both marriages together, with Doña Letizia sitting between the King and her father. However, both couples arrived and left the church separately and in the images of the ceremony it was not seen that they exchanged impressions, as Don Juan Carlos did with Doña Sofía.

But despite the efforts of the emeritus to keep the focus away from his person, in all probability to reduce the tension and promote his return to Spain at some point -even if it is punctual-, his name has returned to the fore in the last few weeks on the occasion of a podcast, 'Corinna and the King' in which her former partner recounts intimacies and different moments in her life.

The project, which is made up of eight chapters of which four have already been published and whose producers have claimed to have nothing to do with the aristocrat, generated some controversy as it came to light on the eve of a new hearing in the court of London for the civil lawsuit for harassment and defamation that Corinna filed against Don Juan Carlos.

At said hearing, held on November 8, the lawyers for the emeritus presented the arguments for which they consider that Judge Mathew Nicklin's initial decision not to recognize any immunity to Juan Carlos I for the alleged harassment denounced by Corinna should be revoked, putting the focus precisely on the fact that, according to her, the CNI participated in the events by order of the then monarch, they would be "sovereign acts" and immune.

Don Juan Carlos's lawyers have appealed the decision adopted on March 24 by Judge Nicklin, who determined that he cannot claim any immunity to avoid Larsen's civil claims. However, they can only appeal the events that occurred between 2012 and 2014, before his abdication. At the moment there is no date for the decision on the appeal to be known.

In the podcast, Corinna has recounted how she met Don Juan Carlos and the monarch's courtship process until they began a sentimental relationship, as well as her stays in the old hunting lodge of El Pardo, which she named 'La Casita' and the engagement ring that he gave her.

It has also revealed that the emeritus had relationships with other women while he was with her, as well as his tense first meeting with Doña Sofía and some of the hardest moments in the life of Don Juan Carlos, such as the accidental death of his brother Alfonso from a shot and that it was he who pulled the trigger.

Likewise, the businesswoman has revealed that the emeritus returned from his trips "with bags full of cash" that "friends" had given him and has also narrated how the hunting accident occurred in Botswana in 2012 that marked a before and after in the life of the then monarch.

According to his version, Don Juan Carlos had been drinking with friends before the fall that fractured his hip occurred. When it was decided to evacuate him on Corinna's private plane, there was no 'plan B' in case the monarch's condition complicated, which was believed to have internal bleeding.

Despite these revelations from what was his partner, the King emeritus has remained silent and has not come out to deny it or qualify what it has recounted.

The appearance of the podcast led Unidas Podemos together with the independentistas of ERC, Bildu, Junts, the PDeCAT and the CUP, as well as other investiture partners such as Más País, Compromís and the Galician Nationalist Bloc (BNG), to once again request the opening of a commission of investigation against Don Juan Carlos that did not prosper this Monday thanks to the vote against PSOE, PP and Vox.