The dialogue table meeting lasted one hour and 45 minutes 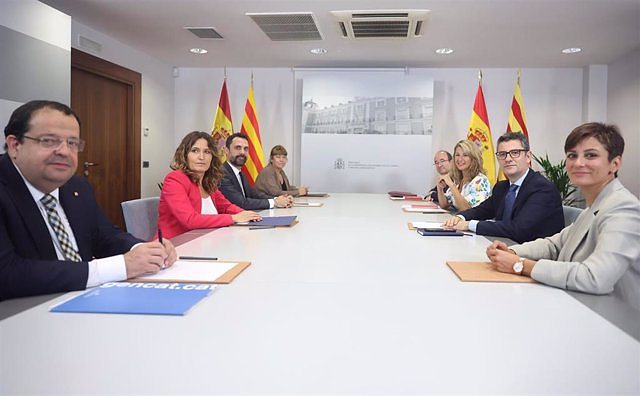 The dialogue table between the Central Government and the Generalitat of Catalonia ended at noon after an hour and 45 minutes of meeting, according to sources from Moncloa.

Next, the Minister of the Presidency, Relations with the Courts and Democratic Memory, Félix Bolaños - who heads the delegation of Pedro Sánchez's Executive - will appear at a press conference from Moncloa scheduled for 12:30 p.m.

In addition, his counterpart in the Catalan government, Laura Vilagrà, will offer a press conference from the Centro Cultural Blanquerna, seat of the Generalitat in Madrid.

This Wednesday's meeting began at 10:00 a.m. in La Moncloa with the forecast of closing agreements and with "dejudicialization" as the underlying issue, after both administrations agreed on it in a previous meeting, although until now they have not explained in consisting of.

The Central Executive delegation will be headed by Minister Bolaños; the second vice president and minister of Labor and Social Economy, Yolanda Díaz; the Minister of Culture and Sports, Miquel Iceta, and the Minister of Territorial Policy and Government spokesperson, Isabel Rodríguez.

The Catalan part will be integrated by the Councilor of the Presidency, Laura Vilagrà; the Business Councillor, Roger Torrent; the one for Interior, Joan Ignasi Elena, and the one for Culture, Natàlia Garriga. After the meeting, Minister Bolaños will offer a press conference from Moncloa.