Spain and Morocco should hold a summit before the end of the year as agreed with Mohamed VI. 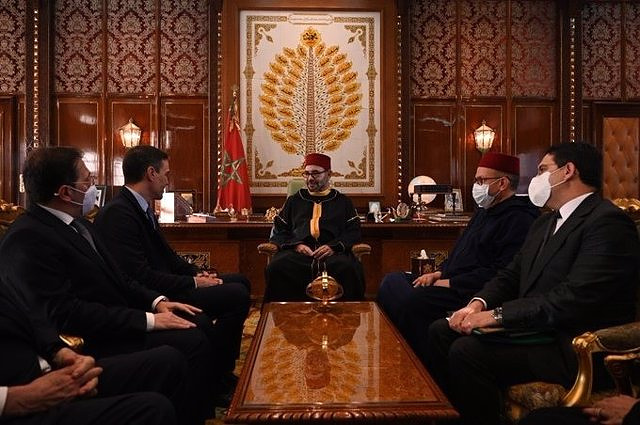 The visit of the President of the Government, Pedro Sánchez, to Rabat and his meeting with King Mohamed VI brought with it the beginning of a new stage in the bilateral relationship, of which perhaps the most innovative aspect was the reopening of customs in Melilla and the creation of a new one in Ceuta. Five months later, the commitment has not materialized.

The president and the Alaouite monarch sealed a joint declaration that was to serve as a roadmap at the start of this new stage, once the crisis had been overcome after acceptance of the Moroccan autonomy plan for the Sahara, and that was to culminate in the celebration of the postponed High Level Meeting before the end of this year.

In said declaration, both governments announced that "the full normalization of the movement of people and merchandise" would be restored "in an orderly manner, including the appropriate customs and people control devices at land and sea level."

This point had a fairly immediate realization, with the reopening on May 15 of the land borders with Morocco, although only to citizens of the European Union and with permission to circulate in Schengen territory, after two years and two months of closing the steps border crossings of El Tarajal, in Ceuta, and Beni Enzar, in Melilla, as a result of the pandemic.

As of May 31, a second phase began that allowed access to "legally recognized cross-border workers." But the situation has not yet been resolved for the rest of Moroccans. Until before the pandemic, residents in the provinces of Nador and Tetouan, bordering the two autonomous cities, were exempt from visas, but this exemption has not been recovered.

But aside from the resumption of human trafficking - which was also resumed by sea - between the two countries, there was the merchandise. In this sense, during the press conference he offered in Rabat, Sánchez indicated that the Melilla customs office was going to be reopened, which Morocco unilaterally closed in 2018, and a facility of this type was going to be opened in Ceuta, where it never existed.

The Moroccan Government has never confirmed this point until now, but the Spanish Executive has continued to maintain that thesis. This was reiterated by the Minister of Foreign Affairs, European Union and Cooperation, José Manuel Albares, after meeting in mid-May with his Moroccan counterpart, Naser Burita, to close the agreement to reopen the borders.

Albares defended that "it is very clear" what the joint declaration says. "There is talk of control of people and goods," he stressed, recalling that the Moroccan minister himself said in a joint appearance with him that Morocco is committed to "complying with all the points" of it.

Thus, on June 7, a meeting of Moroccan and Spanish representatives took place in Madrid to address the matter and which ended without an agreement. Representatives of the Ministries of Foreign Affairs, Interior and Finance and their Moroccan counterparts participated in it and discussed "all aspects of the next customs regime in Ceuta and Melilla" within the framework of "normalization, gradualness and good neighborliness" agreed upon.

Since then, there has been no news of new meetings of this type or progress in the negotiation. Both the Ministry of Foreign Affairs and the Ministry of the Interior remain silent and appeal to discretion in everything related to Morocco and the steps taken with the neighboring country in what has to do with this issue.

In contrast, both Albares and the Minister of the Interior, Fernando Grande Marlaska, have valued in recent months the benefits that the new relationship with Morocco is providing, especially with regard to the reduction in immigrant arrivals both to the Canary Islands as well as to the peninsula.

According to Interior data up to August 31, the arrival of migrants has decreased by 10% compared to last year, with a drop of 34% by sea, mainly to the Peninsula and the Balearic Islands. Arrivals through the Canary Islands, however, continue to increase (14.9%), although the growth is not as pronounced as in previous months.

They have also welcomed the success of Operation Crossing the Strait (OPE), which started on June 15 after a two-year hiatus due to the pandemic, and which will be officially completed in the coming days. The departure phase closed on August 15 with a decrease of 13.3% in passengers and 9.7% in vehicles compared to 2019, the last year before the Covid-19 pandemic in which device was held.

The joint declaration also provided for the reactivation of sectoral working groups and the reactivation of other old ones, including the one related to immigration, which met at the beginning of May in Rabat, and the one in charge of the delimitation of maritime spaces on the Atlantic coast with the Canary Islands, that occurred at some point in the month of June without any information being disclosed.

In the document, it was also established that the working groups and other meetings that take place between the two parties must present reports during the bilateral summit. This was to be held in December 2020, but was postponed days before, initially as a result of COVID-19.

The outbreak of the bilateral crisis with the argument of the reception in Spain of the leader of the Polisario Front, Brahim Ghali, and the refusal of Spain to recognize the Moroccan nature of the Sahara as Donald Trump did on December 10, 2020, postponed the meeting sine die , which will take place in Morocco when it finally takes place.

‹ ›
Keywords:
MarruecosPedro Sánchez
Your comment has been forwarded to the administrator for approval.×
Warning! Will constitute a criminal offense, illegal, threatening, offensive, insulting and swearing, derogatory, defamatory, vulgar, pornographic, indecent, personality rights, damaging or similar nature in the nature of all kinds of financial content, legal, criminal and administrative responsibility for the content of the sender member / members are belong.
Related News