The creation of companies plummets 14.4% in July and dissolutions increase 8% 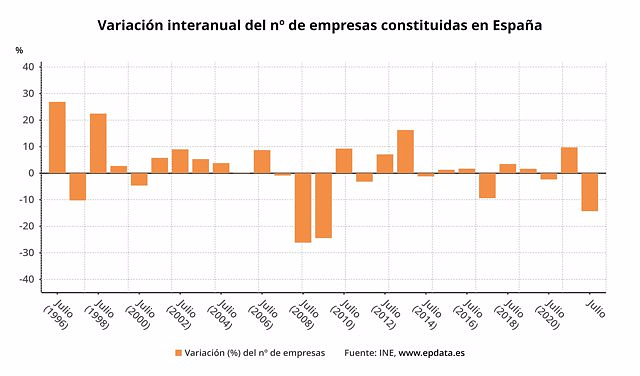 The number of new commercial companies fell 14.4% in July compared to the same month of 2021, to a total of 7,180 companies, its lowest figure since September last year, when just over 6,600 companies were created, according to the data released this Monday by the National Institute of Statistics (INE).

With the fall in July, the creation of companies chains four consecutive months of year-on-year declines after falling by 8.2% in April, 4.6% in May and 6.8% in June.

In the first seven months of the year, 3.3% fewer companies have been incorporated than in the same period in 2021 and 7.7% more companies have disappeared.

Of the 1,624 companies that closed their doors in July, 74.3% did so voluntarily, 13.7% due to a merger with other companies and the remaining 12% for other reasons.

MADRID AND CATALONIA LEAD THE CREATION OF COMPANIES

The communities that created the largest number of companies in July were Madrid (1,665 companies), Catalonia (1,391) and Andalusia, where 1,200 companies were created. The regions with the fewest companies in the seventh month of the year were La Rioja (22), Navarra (32) and Cantabria (49).

THE CREATION OF COMPANIES FALLS 19% IN MONTHLY RATE

In monthly terms (July over June), the incorporation of new companies decreased by 19.4%, while dissolutions fell by 4.4%.

In both cases, these are the largest monthly decreases in a month of July in the last five years.