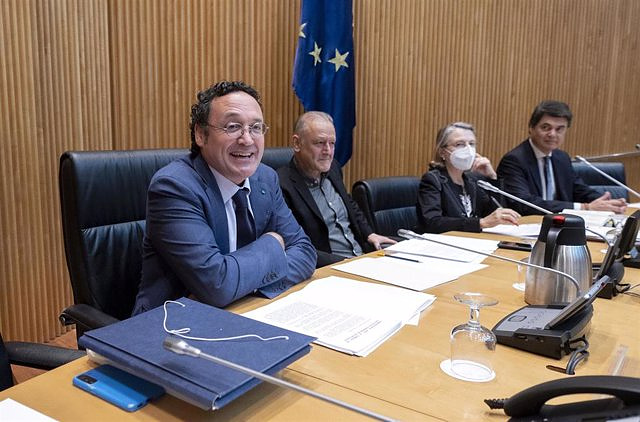 The Council of Ministers has approved this Monday by Royal Decree the appointment of Álvaro García Ortiz as the new Attorney General of the State (FGE) to replace Dolores Delgado, who resigned from the position on July 19 alleging discomfort after a back operation.

Once the Council of Ministers has given its approval to the appointment, García Ortiz travels to the Balearic Islands on Tuesday to swear or promise his position before King Felipe VI. This act will take place at 12:00 in the Almudaina Palace in Palma, and will be attended by the Minister of Justice, Pilar Llop.

During it, both García Ortiz and the president of the Supreme Court and the General Council of the Judiciary, Carlos Lesmes, will intervene.

The approval of his appointment by the Council of Ministers comes after García Ortiz has appeared before the Justice Commission of the Congress of Deputies, where they examined his suitability for the position.

The candidate claimed his worth to occupy the position in the face of criticism from the PP, Vox and Ciudadanos, who accused him of being "a clone" of his predecessor, Dolores Delgado, and criticized his "affinity" with the PSOE for attending an act with Galician socialists and they disfigured the position of the Prosecutor's Office in the 'Miguel Ángel Blanco' and 'Stampa' cases.

García Ortiz announced his intention to improve the decision-making system and judgment formation in the State Attorney General's Office (FGE) to "guarantee the autonomy" of prosecutors.

In addition, he vindicated Delgado's work at the head of the Public Ministry and advanced that his mandate will be a "continuation" of the work carried out by the former Minister of Justice.

In the agreements of the Council this Monday, it is stated that García Ortiz has a degree in Law from the University of Salamanca and has been a Career Prosecutor since 1999. Prosecutor of the Supreme Court Chamber, appointed head of the Technical Secretariat of the FGE by virtue of Royal Decree 434/2020, of March 3, and has been a member of the Fiscal Council since 2018.

He began his professional career in the Balearic Islands (Mahón) and in the TSJ of this autonomous community. His last destination, before the General Prosecutor's Office, was the Santiago de Compostela Prosecutor's Office and the Superior Court of Justice of Galicia (2002-2020). During his stay in Galicia he also held the position of prosecutor for Territory Planning, Historical Heritage and Forest Fires (2007-2009).

Highlights of his career as a prosecutor include "his involvement and defense in the environment" where he has worked on various publications, presentations, research work, standing out for being one of the greatest experts in forest fire investigations, he held the position of Special Prosecutor of Fires in the Autonomous Community of Galicia (since 2004).

They also point out that he is very knowledgeable about crimes related to animals: poisoning, baits, etc. And he has worked on different papers on climate change, as evidenced by his participation in the COP-25 in Chile-Madrid.

They also remember that he worked since 2005 on the Prestige case (November 2002) in all its phases: instruction, resources and execution.

They highlight his active teaching work in the legal field; different kinds of publications; and international participation. And they add that he is in possession of a Silver Cross of Merit from the Civil Guard (2008), Medal of Merit from the National Police Corps (2007) and First Class Distinguished Cross of the Order of Saint Raymond of Pañafort (2013).

‹ ›
Keywords:
Consejo De MinistrosDolores Delgado
Your comment has been forwarded to the administrator for approval.×
Warning! Will constitute a criminal offense, illegal, threatening, offensive, insulting and swearing, derogatory, defamatory, vulgar, pornographic, indecent, personality rights, damaging or similar nature in the nature of all kinds of financial content, legal, criminal and administrative responsibility for the content of the sender member / members are belong.
Related News