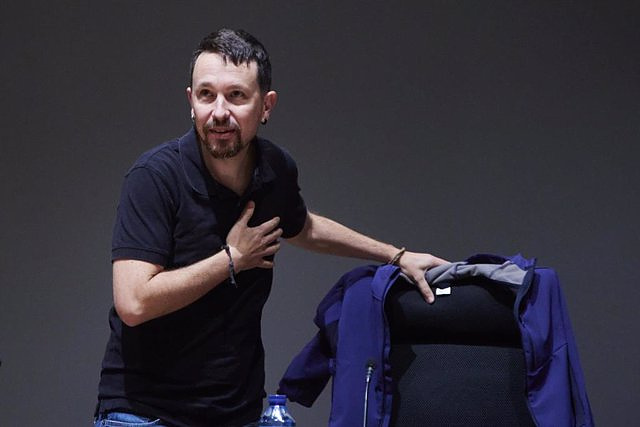 The Complutense University of Madrid has proposed former Vice President Pablo Iglesias to hold a position as associate professor in the Faculty of Political Sciences, as he is the candidate with the best score in the selection process.

Specifically, the teaching position that Iglesias will hold deals with 'Analysis of political and electoral behavior / Theory and practice of democracies', and it was the third place he applied to return to this university, where he already taught before enrolling in active politics as the first leader of Podemos.

In this way, the selection commission has published a resolution, dated November 21, in which it gives Iglesias a score of 7.5 points, in a shortlist of four applicants who opted for the process. Two other candidates were excluded from the selection test.

The scale criteria weighed a series of elements and the one that gave the highest score was professional experience, especially outside the academic field as the priority element to define the allocation of the position. This section could mean up to six valuation points and Iglesias has obtained five.

The teaching experience has also been valued in the case of the former leader of Podemos, getting 1.6 points, along with other merits that have also been rated in his favor.

The evaluation board formalizes the proposal for the concession of the teaching position, although it allows a period of ten working days to file complaints or review the evaluation made. If this request is made, a period of three months is specified to resolve hypothetical complaints.

Through social networks, Iglesias has highlighted that on this occasion he has not been excluded from the process, as happened in the other position in the Faculty of Political Sciences to which he aspired, and that he has been rated as the best candidate in attention to curricular merits. "My greatest dream has always been to be a teacher", he has shelled through a message on Twitter.

In the other position for which he competed, which dealt with 'Political Science and Administration', Iglesias was discarded along with the rest of the candidates in the selection process, which he described as a "strange" situation and "all infrequent". .

He also opted for a teaching position at the Faculty of Journalism, although he did not obtain the position that finally fell to the journalist and presenter Sandra Daviú.

The former vice president and leader of Podemos then remained in a rating of four while the candidate who has won the position is the journalist and presenter Sandra Daviú, who has garnered 7.4 points during the process. In this way, she was in fifth place in a shortlist of seven candidates.

Precisely yesterday, the former leader of Podemos announced that he will soon launch a new Internet television channel, called 'Canal Red', to compete with the "media right", which he will create through alliances and private resources but also with citizen contributions.

To do this, it launched a crowdfunding campaign to obtain an amount of 100,000 euros, an objective that it has achieved within a few hours of deploying this initiative.

Various leaders of the purple formation have shown their support for the new audiovisual journey of Iglesias, such as the case of the current secretary general, Ione Belarra, or the spokesman for United We Can in Congress, Pablo Echenique.

Iglesias left active politics after the Madrid elections of May last year and after a brief period out of the public scene, he turned to collaborations with various media such as the radio stations RAC1 and La Ser, a columnist in publications such as CTXT, Gara and ARA, but above all through the podcast 'La Base', which he hosts and is broadcast in the newspaper 'Público'. In the past, he has already hosted the television program called 'La Tuerka'.

‹ ›
Keywords:
Pablo IglesiasUniversidades
Your comment has been forwarded to the administrator for approval.×
Warning! Will constitute a criminal offense, illegal, threatening, offensive, insulting and swearing, derogatory, defamatory, vulgar, pornographic, indecent, personality rights, damaging or similar nature in the nature of all kinds of financial content, legal, criminal and administrative responsibility for the content of the sender member / members are belong.
Related News