The commons do not rule out embezzlement amendments: "Asens is studying the draft" 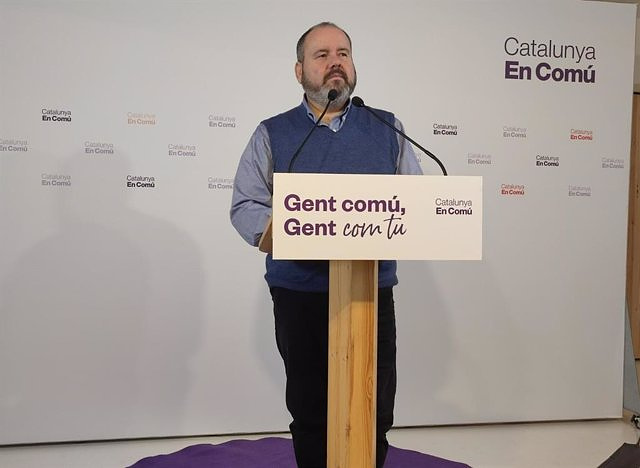 The spokesman for the commons and deputy in Congress, Joan Mena, has not ruled out that the parliamentary group of United We Can (UP) in the Lower House will present amendments to the bill to repeal the crime of sedition to also reform the of embezzlement, and has stated that the group's president, Jaume Asens, "is studying the draft".

This is how the spokesman for the commons reacted this Monday at a press conference after the president of the Generalitat, Pere Aragonès, defended that embezzlement should be reformed after repealing sedition.

"The crime of embezzlement must be limited and it must not be used as it has been used. The reform must be done carefully because it affects crimes of political and economic corruption," warned Mena, who stated that they are working to improve the Penal Code.

Asked about possible UP amendments, the spokesman repeated that they are studying the legal framework, and that Asens is the best person to do it, after which he added that when he "has the most elaborated proposal, he can make it public".

"It is evident that it was modified by the PP with clear political intentions. We must guarantee that the crime of embezzlement does not serve to repress those who have not embezzled", and has defended that the best legal framework must be found to reform embezzlement.

Mena has celebrated that the crime of sedition will finally be repealed, a proposal for which his formation has done "an enormous job to convince those who rejected it", in reference to the PSOE, and has summoned the rest of the political forces in Congress to make it happen.

"This reform is good, to reject it is to side with Feijóo and Abascal. This reform is not about humiliation and betrayal as the right says, but about democracy, dialogue and a better country in terms of human rights," Mena stressed, who He has accused those who think of generating conflict of thinking in an electoral key.

He considers that there are no arbitrary concepts in this reform, but he has warned that the problem may be the interpretation made by the judges: "We have a problem with justice. We have a politicized justice. But this is not the reading of the legislators", and has been open to studying proposals to improve the wording of this reform.

Mena has also stated that he is not surprised by Junts' position on the repeal of sedition and the reform of aggravated public disorder: "I am not surprised that Junts opposes something that benefits Catalonia, that de-stresses and puts dialogue above the government of the judges. Each one is master of his contradictions".

The spokesman for the comuns has urged the Government to open a "real negotiation" on the Catalan Budget for 2023 and has asked it to explain its priorities after more than a month has passed since Junts left the Catalan Executive.

"Each day without negotiation is one more day of budget extension for the Catalans," Mena warned, adding that the Government has not yet opened negotiations with the comuns, but that there has been some contact.