The 'Cholo' board strikes down Numancia in the first preseason test

Axel Witsel made his debut as a mattress player and Álvaro Morata and Saúl Ñiguez had minutes. 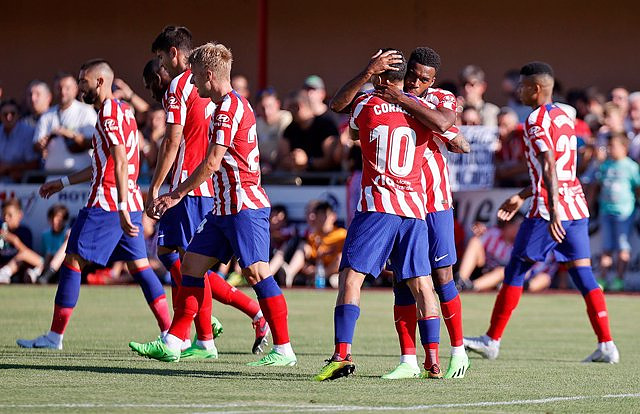 Atlético de Madrid kicked off the pre-season friendlies this Wednesday with a solid victory (0-4) against CD Numancia of the First RFEF, on the occasion of the ninth edition of the Jesús Gil Memorial, where Diego Pablo Simeone's slate worked at the perfection with three of the four corner kick goals.

The 'Cholo' team started the season with victory after two weeks of work, giving off good feelings in a match with few tests and which marked the debut of Belgian midfielder Axel Witsel. Also, Álvaro Morata and Saúl Ñiguez, whose future is not entirely clear, had their first minutes after returning from their respective assignments.

Numancia came out with great force against an Atlético who paid for the traditional preparation in Los Ángeles de San Rafael in the first few minutes. But Oblak, showing off the captain's armband, saved his team by stopping a penalty from Carrillo.

Simeone lined up an eleven with the novelty of Álvaro Morata, who had his first litmus test to gain the trust of his coach. Along with him, the connection between Ángel Correa, Thomas Lemar and Yannick Carrasco left the best chances in the first half.

Precisely, the former Juventus player from Turin exhibited his reading of the game to leave Lemar free in the front and culminate, with a right hand from the front, driving Correa. The Argentine, the most skilled in the opposing area, was the beacon in the rojiblanco attack in the first 45 minutes.

The 'Cholo' board came to light and the set piece knocked out Numancia with two more goals. First it was Correa, who matched Carrasco's past corner with an unstoppable volley, and later Kondogbia, who inadvertently touched a shot by Rodrigo De Paul -similar to the previous one-, although it ended up on his teammate's back to meekly enter the goal .

With 3-0 at the break for Atlético de Madrid, Simeone completely changed the starting eleven and brought on Witsel, who made his debut as a mattress player, along with Saúl Ñiguez and Antonie Griezmann. The attack was completed by Matheus Cunha and youth squad player Rodrigo Riquelme.

Again, after a corner kick, Cunha headed into the back of the net with some luck to score the fourth. The goal reassured the rojiblanco game, which let time run to consider their first test of the course as good.

The anecdote of the match was starred by the subsidiary's goalkeeper Antonio Gomís, who played the last 15 minutes as a striker as he had no more replacements on the bench after Mario Hermoso's injury. In addition, the goalkeeper took the field wearing the shirt of Brazilian central defender Felipe Monterio, who was not called up due to injury.

An afternoon in Burgo de Osma where Atético brought out their available weapons, but awaiting a transfer market that could change the squad in the coming weeks. In fact, a sector of the fans showed their discontent with the rumor that brings the Portuguese Cristiano Ronaldo closer to the red and white ranks, by displaying a banner that read 'CR7 not welcome'.

The next match will be on Saturday, July 30, against Manchester United in Oslo, the first big test before visiting Cádiz in the Ramón de Carranza Trophy on August 4, and closing the preseason outside of Spain, in Tel-Aviv (Israel). ) on August 7, against Juventus in Turin.