The Constitutional Court will not examine the two candidates for the moment, waiting for the CGPJ to name theirs. 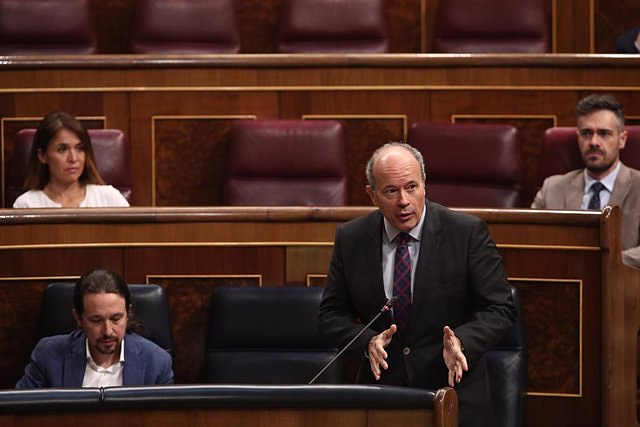 The Constitutional Court will not examine the two candidates for the moment, waiting for the CGPJ to name theirs

The Official State Gazette (BOE) has published this Wednesday the Government's proposal to appoint as new magistrates of the Constitutional Court (TC) the former Minister of Justice Juan Carlos Campo and the former Director General of the Ministry of the Presidency Laura Díez, appointments approved yesterday by the Council of Ministers.

The BOE provision, collected by Europa Press, also indicates that the Plenary of the TC will have to verify the appointments to determine if both Campo and Díez meet the requirements established by the Constitution and the organic law that regulates the functions of the court of guarantees.

According to the sources of the TC consulted by Europa Press, the Constitutional Court has chosen not to immediately examine the two candidates appointed this Tuesday by Moncloa to form part of the TC, waiting for the General Council of the Judiciary (CGPJ) to name also to his two applicants.

As stated in the BOE, the requirements to be part of the TC are, first, to be a Spanish citizen who is also a magistrate, prosecutor, university professor, public official or lawyer. And, second, to be a lawyer of recognized competence with more than 15 years of professional or active practice in the corresponding function.

The Government of Pedro Sánchez had expressed on numerous occasions its intention to appoint the two candidates for the Constitutional Court that corresponds to it by quota without waiting for the CGPJ to designate the other two that complete the third of four magistrates pending renewal.

In these months, the Executive has fluctuated from positions that, at first, contemplated appointing its two candidates for the TC, although the CGPJ could not do the same because then the Organic Law of the Judiciary (LOPJ) prevented it, to others in which he advocated giving the governing body of judges a reasonable time so that, once the legal capacity to do so had been recovered, it nominated his pair for the TC.

The Constitutional sources consulted indicated that, for the moment, Campo and Díez will not be examined alone in plenary, which must analyze their suitability by verifying that the nominees meet the legal requirements to be a court magistrate.

The aforementioned sources indicated that, when the TC receives the agreement of the Council of Ministers by which Campo y Díez is appointed, it will inform the CGPJ so that it in turn proceeds to appoint its two applicants to the court of guarantees .

However, the sources stressed that it is a temporary decision. In this sense, they warned that the TC could review it if the governing body of the judges delays in the appointment of its two applicants. In this situation, they do not rule out that those nominated by Moncloa will have to face the Constitutional exam alone.

Campo and Díez would come to replace the president of the TC, Pedro González-Trevijano, and Antonio Narváez, the two magistrates who were once proposed by the Government of Mariano Rajoy, while the vice president, Juan Antonio Xiol, and Santiago Martínez-Vares , must be relieved by those designated by the CGPJ.

These four magistrates, whose mandate expired on June 12, make up the third that the Constitution entrusts to name the Government and Council, hence the doubts raised about the possibility that they can take office by halves (two by two) or if only a complete renovation is possible (all four at the same time).

‹ ›
Keywords:
Consejo De MinistrosTribunal ConstitucionalJuan Carlos Campo
Your comment has been forwarded to the administrator for approval.×
Warning! Will constitute a criminal offense, illegal, threatening, offensive, insulting and swearing, derogatory, defamatory, vulgar, pornographic, indecent, personality rights, damaging or similar nature in the nature of all kinds of financial content, legal, criminal and administrative responsibility for the content of the sender member / members are belong.
Related News