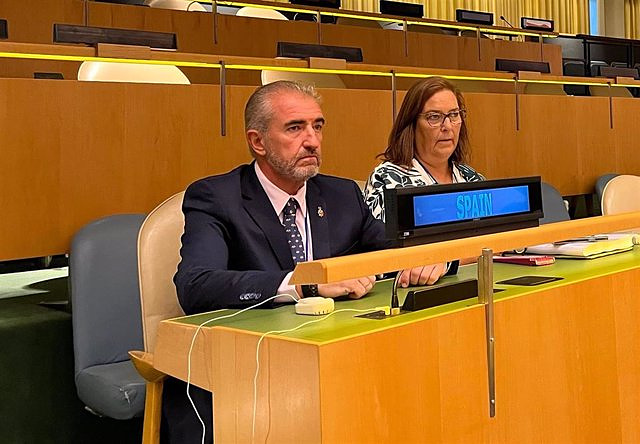 The Association of Victims of Terrorism (AVT) has taken to the first World Congress on Victims of Terrorism held at the UN headquarters in New York its criticism of the Government of Pedro Sánchez for "paying" for the support of EH Bildu with the approach of ETA prisoners. It has also denounced that there are more than 300 unresolved cases and that acts of public tribute ('ongi etorris') continue to be held.

The complaint was made by the adviser of the AVT, Miguel Folguera, during one of the panels of the UN congress inaugurated yesterday with the participation of the Minister of the Interior, Fernando Grande-Marlaska, who is criticized for "turning his back" on not include them in the official agenda of the Spanish delegation.

"In my country, Spain, we victims are experiencing a revictimization. The main partners of the Government are the heirs of the institutional arm of a terrorist organization such as ETA, which continues without condemning the murders of our loved ones or condemning that no murder is justified ", has pointed out Folguera.

In its intervention before the UN, the AVT has denounced that, as "as payment" for Bildu's support, the Government has "repealed the dispersion policy, transferring the murderers to prisons near their homes." "Meanwhile, the victims have to travel thousands of kilometers to bring flowers to the cemeteries," they recalled.

The AVT, which maintains a frontal criticism of prison policy, accused the Sánchez Executive on August 31 of "consummating its betrayal" due to the decision of the Ministry of the Interior to bring 13 other ETA prisoners to a prison in the Basque Country , including Francisco Javier García Gaztelu, alias 'Txapote', and Henri Parot, with a long history of murder behind him.

"We have more than 300 unsolved cases in our country and when they are released it is crazy: they are received as heroes with total impunity, humiliating us victims of terrorism", continued Folguera, who traveled to New York with the AVT president, Maite Araluce. "We ask the UN to intervene to avoid this re-victimization", they have claimed.

During the intervention within a panel on links between sexual violence related to conflicts and terrorism, the AVT recalled that it is the "dean and majority association in Europe and the world", with 4,800 associates and 41 years of experience.

Based on its experience in assisting victims, the AVT --which has thanked the police and judges for their work-- has handed over to the United Nations Deputy Secretary General for the Counter-Terrorism Office, Vladimir Voronkov, a dossier with different contributions on the plan of action after an attack already implemented by the Community of Madrid or its comments --as a result of the comprehensive Spanish law-- on the future law being studied in the UN forum.

At the opening of the congress, the Minister of the Interior, Fernando Grande-Marlaska, defended Spain's model for defeating terrorism and promoting "pioneering" legislation to care for victims, thanks to "the broad political and social consensus." "We Spaniards have decided not to forget," he said in a speech praising the "ethical example and colossal dignity" of the victims.

Interior has offered to host the second world congress of victims in Spain and has committed 400,000 euros to an international solidarity fund in a congress in which, in the previous weeks, from the AVT and also Dignity and Justice they criticized that there had been no they. Finally, the Ministry offered to assist them by subsidizing their travel to New York based on annual public aid.

‹ ›
Keywords:
BilduPedro SánchezETATerrorismoOnu
Your comment has been forwarded to the administrator for approval.×
Warning! Will constitute a criminal offense, illegal, threatening, offensive, insulting and swearing, derogatory, defamatory, vulgar, pornographic, indecent, personality rights, damaging or similar nature in the nature of all kinds of financial content, legal, criminal and administrative responsibility for the content of the sender member / members are belong.
Related News