The instructor agreed to his summons last July, considering that there were indications of his participation in the events. 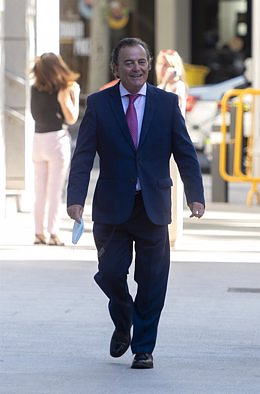 The instructor agreed to his summons last July, considering that there were indications of his participation in the events

The magistrate of the National Court Joaquín Gadea, who is investigating former judge Fernando Presencia for alleged crimes of libel, slander and against the high institutions of the State for the accusations launched against magistrates of the Supreme Court (TS), will take a statement this week as investigated four people for contributing to the dissemination of the so-called 'Royuela file'.

It was last July when the reinforcement magistrate of the Central Court of Instruction Number 6 agreed to his summons. Thus, he will listen to Juan Martínez Grasa and Álvaro Arteaga García on Tuesday from 11:00 a.m., while Santiago Royuela and Alberto Royuela will testify on Thursday at 10:00 a.m.

With this objective, Gadea issued an order to all Spanish telecommunications service providers "so that they adopt the appropriate technical measures to take the acodap.org domain offline and, consequently, block access to said domain from Spanish territory.

Likewise, it agreed that an order be sent to Google to close and block the YouTube channels called "ACODAP NOTICIAS" and "Santiago Royuela Samit". Likewise, it asked the multinational to provide all the data corresponding to the registration or creation of the aforementioned channels, indicating the registration email, alternative emails, associated telephone numbers and other valid data for the identification of the owner of the same.

In his car, the magistrate explained that he agreed to these proceedings after receiving a letter from the UCO in which he requested to investigate who is behind the website acodap.org and the different YouTube channels, and after one of the accusations individuals, that of Joaquín Bosch, indicated that the domain was still operational in the month of July.

After listing the various complaints, writings and letters sent by the judge under investigation and by those now accused denouncing to the UDEF or the German embassy that there were, for example, bank accounts in paradise and that they belonged to former presidents or ministers, the National Court considered that there were indications of participation in the events with respect to these four people.

Judge Gadea began to investigate on June 21 as a result of a complaint filed by the chief prosecutor of the AN, Jesús Alonso, against Presencia for the statements made regarding magistrates of the Supreme Court, including its president and that of the General Council. of the Judiciary, Carlos Lesmes.

It should be remembered that on June 10 the TS already denounced Presencia before the CGPJ for disseminating "radically false" and "slanderous accusations" that bear no relation to the "truth" about the patrimonial situation of the magistrates of the high court.

In this context, the instructor asked the Central Operative Unit (UCO) of the Civil Guard to carry out the appropriate investigations to determine those possibly affected by the publications made on the former judge's website, as well as the existence in other channels of the content disseminated by Presence.

He also ordered the closure of said website to put an end to "the permanent situation of attack against the legal assets of the victims and the institutions of the State that are being impudently infringed by the accused." To do this, he requested the help of the French authorities because the domain was geolocated in the neighboring country.

Likewise, Gadea was interested in gathering information on a bank account allegedly linked to Presencia, focusing on a possible crime of money laundering or other irregularities.

According to the complaint from the Prosecutor's Office, the former judge asked users of his website in all publications to make donations in favor of him or his association, ACODAP, "as an economic contribution to support and make possible the fight against corruption."

On July 7, Presencia refused to submit to the psychiatric analysis of the doctor of the National High Court, refusing in the same way to answer the questions of the judge who is investigating the alleged slander that he would have directed against different magistrates.

"There are no statements," he replied when he left the National Court, where he was summoned from 09:00 a.m. to be examined by the coroner. The objective of this test, agreed by Gadea, was to determine if he suffered from any pathology that would make him incompetent.

‹ ›
Keywords:
Audiencia NacionalTribunal Supremo
Your comment has been forwarded to the administrator for approval.×
Warning! Will constitute a criminal offense, illegal, threatening, offensive, insulting and swearing, derogatory, defamatory, vulgar, pornographic, indecent, personality rights, damaging or similar nature in the nature of all kinds of financial content, legal, criminal and administrative responsibility for the content of the sender member / members are belong.
Related News