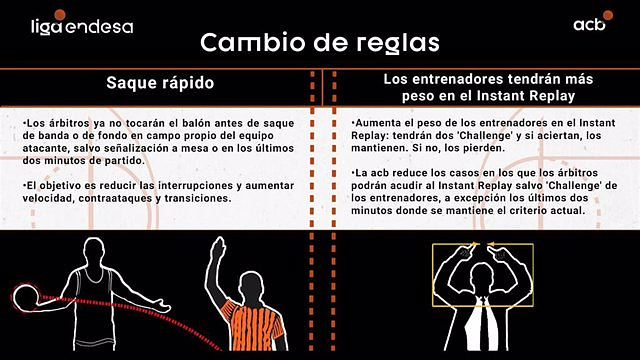 The acb referees will not touch the ball before the kick-off and throw-in in their own half and will give more weight to the coaches in the use of 'Instant Replay' in the matches of the 2022-23 season to give more fluidity and continuity to the game. game, as announced this Thursday in a statement.

During the first 38 minutes of the match, it will not be necessary for the referees to touch the ball before a throw-in or baseline in the attacking team's own field, and the players can put it into play immediately, without interruptions, thus facilitating a quick restart of the game and possibly more counterattacks and transitions.

Thus, with this rule change validated by FIBA ​​for acb competitions, the referees will only continue to touch the ball during the first 38 minutes in actions on the offensive or defensive field after an action that requires signaling to the table as a foul, IRS, change or dead time.

In the last two minutes of regulation time or overtime, it will continue to be done in the same way as to date.

On the other hand, the acb has increased the number of 'Challenges' for each technician to two - it maintains them if the previous arbitration decision changes and loses them if it is confirmed - and limits the cases in which, until the last two minutes, the members may go to review a play unless requested by the coaches.

During the first 38 minutes, the referees will noticeably reduce the situations in which they may decide to go to Instant Replay. The review of the other actions, including the check of whether it is a normal or unsportsmanlike foul -almost 40% of the reviews last season- can only be at the request of the coaches.