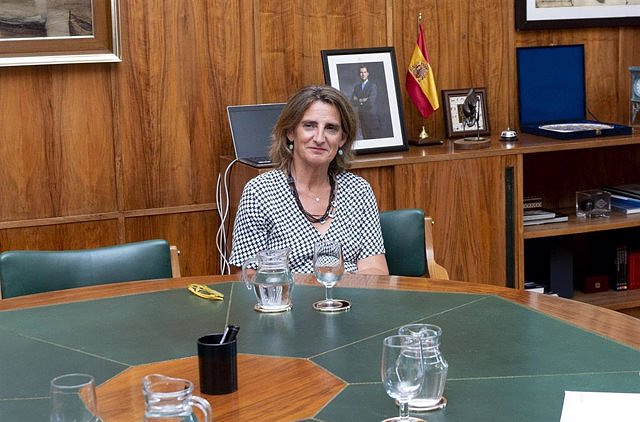 Teresa Ribera, Vice President of the Government and Minister for the Ecological Transition and the Demographic Challenge, meets this Monday with representatives of the industrial sector in the framework of the round of talks for the preparation of the Contingency Plan.

According to the cabinet led by Teresa Ribera, the meeting, which takes place at the Ministry's headquarters, will also be attended by the Minister of Industry, Commerce and Tourism, Reyes Maroto.

This meeting, which is part of the design of the Contingency Plan that the Government must send to the European Commission within the community strategy to deal with the impact of the war in Ukraine, is part of the round of talks of the Third Vice President with the main sectoral, social, political and civil society agents to analyze the situation and collect proposals that help Spain reduce its gas consumption, in accordance with the commitment made in the European framework.

Within the round of contacts, Ribera held a meeting last Friday with Rubén Hernando, president of the Spanish Cogeneration Association (Acogen), and with Julio Artiñano, president of the Spanish Association for the Promotion of Cogeneration (Cogen) and the the previous day with representatives of the parliamentary political formations and the Ministry of the Presidency, Relations with the Courts and Democratic Memory.

These meetings are part of the new round of conversations that Ribera has started with the main sectoral, social, political and civil society agents with a view to designing the Contingency Plan.

Over the past week, the third vice-president of the Government has already met with different actors in the sector, such as the presidents of Naturgy, Francisco Reynés; from Iberdrola, Ignacio Sánchez Galán, and from Redeia, Beatriz Corredor; as well as with the CEO of Enagás, Arturo Gonzalo Aizpiri. She has also held meetings with representatives of the electricity (Aelec) and gas (Sedigas) employers.

This round of talks takes place after the validation in Congress of the energy saving decree, which will finally be processed as a bill for the inclusion of some modifications demanded by the government partners.

The decree, whose measures will continue to be applied despite being processed as a bill, includes the first package of energy saving measures planned to comply with the voluntary reduction in gas consumption, given the risk of a supply cut by Russia , as well as aid for the promotion of public transport such as free Cercanías, Rodalíes and Media Distancia services from September 1 to the end of the year.

This energy saving plan, which will be completed with the design of the Contingency Plan, limits heating and cooling temperatures to 19 and 27 degrees Celsius, respectively, in public administration buildings, commercial establishments such as department stores or shopping centres, cultural spaces or transport infrastructures such as stations or airports. The norm excludes hospitals, educational centers, gyms, hairdressers or restaurant kitchens.

Likewise, it requires the lights of shop windows and unoccupied public buildings to be turned off after 10:00 p.m. and requires that before September 30, both buildings and premises have automatic closures on access doors to prevent them from being permanently open.

Commercial spaces, public buildings, cultural spaces and hotels that fail to comply with the energy saving and efficiency plan approved by the Government will face fines of up to 60,000 euros for minor infractions, up to six million euros for serious infractions and up to 100 million euros for the very serious.

The same decree law also contains new calls for aid for land transport of goods, speeds up renewable energy and storage facilities and contemplates the complementary scholarship of 100 euros for anyone who receives scholarships and study aid announced by the President of the Government in the Last Debate on the State of the Nation.

‹ ›
Keywords:
Teresa RiberaDespoblación En EspañaAsociación Española De Cogeneración
Your comment has been forwarded to the administrator for approval.×
Warning! Will constitute a criminal offense, illegal, threatening, offensive, insulting and swearing, derogatory, defamatory, vulgar, pornographic, indecent, personality rights, damaging or similar nature in the nature of all kinds of financial content, legal, criminal and administrative responsibility for the content of the sender member / members are belong.
Related News