Gang violence, the energy crisis and migration, key issues to understand the elections in Sweden. 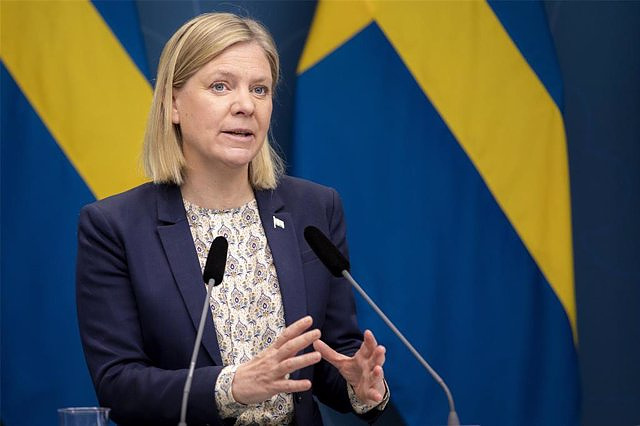 Gang violence, the energy crisis and migration, key issues to understand the elections in Sweden

Sweden goes to the polls this Sunday in elections in which the Social Democratic Party of the current prime minister, Magdalena Andersson, will face the conservative bloc in a historic moment for the country due to its future accession to the Atlantic Alliance.

Andersson, the first woman to lead a government in Sweden, was elected prime minister in November 2021, although she resigned shortly after being appointed following the departure of her coalition partner, the Green Party, which decided to withdraw from the Executive after realizing that they would have to govern with accounts proposed by the opposition.

Andersson presented his resignation to the president of the Swedish Parliament, Andreas Norlen, amidst general stupor, which caused a political crisis that was resolved a few months later, when the Social Democrat was sworn in as a solo government.

This Sunday's elections are also decisive due to the future integration of Sweden into NATO, since the parties in favor of the union control more than 40 percent of Parliament, but the far-right Swedish Democrats, led by Jimmie Akesson, do not rule out changing posture and finish tipping the scales.

Another possible stumbling block for Andersson is pressure from the conservative and opposition leader, Ulf Kristersson, of the Moderate Party, who has also made the NATO accession process part of his electoral campaign, but has differentiated himself from the Social Democrats by demanding Government more speed and decision to accelerate incorporation.

The elections will therefore inevitably be marked by the future entry of Sweden into NATO, since last May Stockholm requested formal entry into the Alliance together with Finland in reaction to Russia's war against Ukraine.

Under the voting system, any party must receive at least four percent of the vote to be allocated a seat. Remember that all Swedish citizens over the age of 18 are called to go to the polls.

In the last elections, held in 2018, the Social Democrats added 28.3 percent, followed by the Moderates (19.8 percent) and the Sweden Democrats (17.5 percent), a key ultra-right anti-immigration party for future post-election alliances within the conservative bloc.

Another of the key parties is the Swedish Greens, who triggered the political crisis after breaking up the coalition and who have traditionally supported the Social Democrats together with the Left Party, which forced the resignation of the coalition leader, Stefan Lofven, in June 2021. Andersson will therefore have to convince these minority parties to govern.

On the side of the conservative bloc, Kristersson could win the position of prime minister if he manages to promote an alliance of the right and extreme right, with the Swedish Democrats, the Christian Democrats and the liberal minority, the latter two being against agreeing with the extreme right.

According to the latest Kantar Sifo polls, the Social Democratic Party has almost 30 percent of the support, followed by the Sweden Democrats, with 20 percent, while the Moderate Party is projected with 17 percent.

VIOLENCE: KEY IN THE ELECTION CAMPAIGN

The electoral campaign has been focused on issues such as migration, the energy crisis or gang violence. Opposition leaders, the Moderates and the Sweden Democrats argue that the Andersson government has maintained a soft stance on the fight against drug trafficking.

In particular, one of the events that triggered the criticism of the opposition against the Swedish Social Democrats was a shooting that occurred last August in a playground in the city of Eskilstuna, a city of about 60,000 inhabitants 120 kilometers from Stockholm, the capital.

A mother and child were caught in the crossfire between rival gangs, prompting far-right Akesson to visit Arby, where the shooting took place, urging the government to take serious action to tackle crime in Sweden.

"After the visit, I filed a demand on behalf of the Sweden Democrats. The next government's most important priority must be the judiciary, and we demand that an additional SEK 20 billion per year be invested in this," he said at the time. then on his official Twitter profile.

Sweden is heading to break with its neutrality, by virtue of which it was left out of the two world wars and avoided aligning itself with any bloc after the fall of the Soviet Union. The Russian invasion of Ukraine has been the definitive trigger, since if in January only 37 percent of Swedes supported joining NATO, the figure now rises to 53 percent, according to a Novus poll published in May.

Turkey has not yet ratified the entry of Sweden and Finland into NATO, already endorsed by two thirds of the member states, because Ankara reproaches Stockholm for its relationship with the Kurdistan Workers' Party (PKK), something that the Government already has denied on several occasions.

Ratification is the longest stage in the process of adhering to the military organization, with the bureaucratic procedure of all the allies who, in turn, have different validation systems and involve, in many cases, parliamentary votes.

Once all the members of the alliance and the candidates have approved these protocols, the next step takes them to Washington, where the documents are deposited with the United States Government, specifically with the State Department. It is not until all are delivered that the aspiring country becomes a member of NATO.

‹ ›
Keywords:
SueciaOTAN
Your comment has been forwarded to the administrator for approval.×
Warning! Will constitute a criminal offense, illegal, threatening, offensive, insulting and swearing, derogatory, defamatory, vulgar, pornographic, indecent, personality rights, damaging or similar nature in the nature of all kinds of financial content, legal, criminal and administrative responsibility for the content of the sender member / members are belong.
Related News