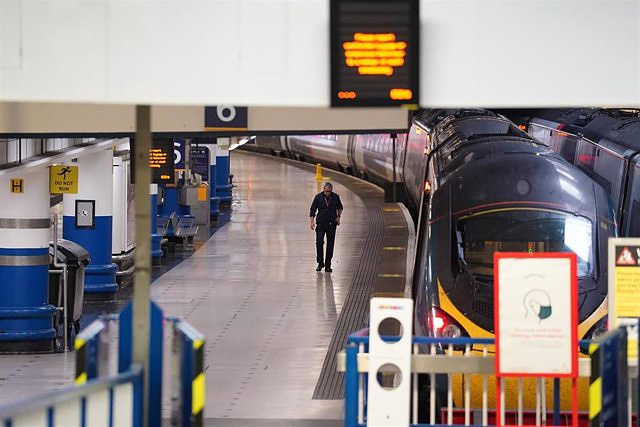 The British railway operator Great Western Railway (GRW) has confirmed the suspension of the service between Slough and Paddington stations due to a technical failure, which affects citizens trying to reach London for Elizabeth II's state funeral from the city from Reading or from Heathrow Airport.

"Due to damage to power lines, all lines between Slough and Paddington have been blocked," GRW said on its Twitter account.

"Train services leaving or arriving at these stations will be canceled or postponed for a period of up to 90 minutes. These alterations are expected to continue until 10:00 a.m.," it added.

According to information collected by the British television network BBC, the incident affects the services of GWR, Heathrow Express and the Isabel line. Also, there are delays between Reading and Newbury because of a hit-and-run.

The London Metropolitan Police will proceed this Monday to close numerous streets in central London to coincide with the state funeral of Elizabeth II, who died last week at Balmoral Castle.

Thus, it has indicated that from 5:00 a.m. (local time) the area between Buckingham Palace, Green Park and St James Park will be closed, in the midst of one of the largest transport operations in the United Kingdom due to that a million people are expected to visit the capital.

‹ ›
Keywords:
Londres
Your comment has been forwarded to the administrator for approval.×
Warning! Will constitute a criminal offense, illegal, threatening, offensive, insulting and swearing, derogatory, defamatory, vulgar, pornographic, indecent, personality rights, damaging or similar nature in the nature of all kinds of financial content, legal, criminal and administrative responsibility for the content of the sender member / members are belong.
Related News