Spain survives Finland and reaches the semifinals of the Eurobasket 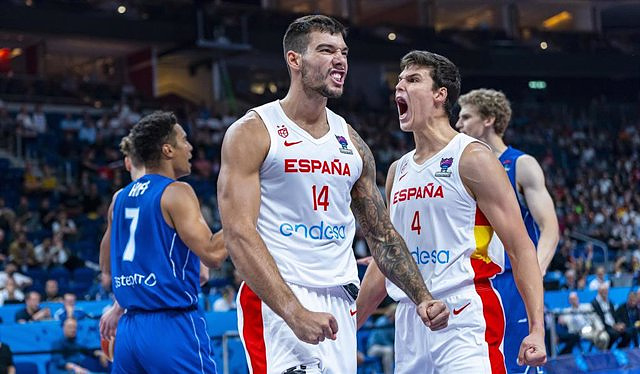 The Spanish basketball team is already in the semifinals of the Eurobasket after beating Finland in a match with two very different parts, a first in which the Scandinavians came to have a 15-point advantage and a second in which Spain took a step forward in attack and defense to end up winning by 100-90.

The second part of the Spanish team was overwhelming, going from losing by nine points to taking the lead on the scoreboard before the end of the third quarter. The national team scored 30 and 27 points in the periods after the break, a prodigious performance in attack that was complemented by a much more active defense. Thus, they bothered Finland, who also saw the percentage of outside shots drop, their main asset in the first half.

Willy Hernangómez was the beacon of Sergio Scariolo's team. The center of the New Orleans Pelicans scored 27 points, with more than 70 percent accuracy in his shots to the basket, to which we must add five rebounds and a block. With him on court, Spain had an advantage of 15 points, being the second best player in this section, only behind his brother Juancho, with 16.

On the other side of the court, the help multiplied, with Lorenzo Brown, Rudy Fernández and Alberto Díaz much more active to block passing lanes. The man from Malaga was once again key, lifting the team in the final stretch, stealing balls and receiving fouls in attack from the rivals. In fact, Spain has achieved the important figure of 12 steals, with its captain as the best exponent with five. In addition, Rudy himself has also been key with his three-point shots in the fourth quarter.

The game started evenly, with Spain trying to prevent Lauri Markkanen from having a performance like the one in the round of 16, when he scored 43 points, although in the end this time he scored 28. In the last five minutes of the first quarter, the Finnish intensity overwhelmed Spain, which chased shadows and bled to death on the scoreboard based on triples. Even on the last play, with time running out, Mikael Jantunen scored a shot from midfield to confirm that the wind was blowing their way.

In the second quarter, Spain tried to drain as much water as it could and, at the very least, avoided bleeding, winning the partial 24-22 and minimally reducing the lead at halftime. However, the Scandinavians managed to take a 15-point lead that Sergio Scariolo's team had to reduce by chipping away at the stones.

The last play of the first part defined a little what those 20 minutes were. With Spain in full swing, Lorenzo Brown arrived in time to lead an attack in which he could have put his team within six points, but he ended up losing the ball between dribbles inside a forest of Finland players.

Everything changed at halftime, where Spain turned the game 180 degrees and the wind changed Finland and hit it in the face. The Nordic team's three-point percentage dropped notably against the new Spanish defense, which no longer conceded as many offensive rebounds as in the first half. In fact, this step forward by closing their own hoop was decisive, as the national team scored 33 points from rival turnovers.

In the last quarter, Spain already entered with an advantage, which they knew how to maintain at all times. Finland came within two points, but Sergio Scariolo's men did not shake their pulse and continued to perform at the same level to finish the game at a spectacular level in attack. Without needing the brilliance of Lorenzo Brown as in the match against Lithuania, both the point guard and Darío Brizuela, Juancho Hernangómez and Rudy Fernández were also in double figures.

In fact, throughout the final stretch, Lorenzo Brown had to handle the ball with two-on-one defenses in which he did not lose a single ball, always managing to get the ball into areas where a teammate was unmarked to generate advantages in attack. In the end, the victory of the Spanish team already qualifies him for the fight for the medals, where he will have to beat the copper against the host Germany next Friday and with Giannis Antetokounmpo as expected.

‹ ›
Keywords:
Finlandia
Your comment has been forwarded to the administrator for approval.×
Warning! Will constitute a criminal offense, illegal, threatening, offensive, insulting and swearing, derogatory, defamatory, vulgar, pornographic, indecent, personality rights, damaging or similar nature in the nature of all kinds of financial content, legal, criminal and administrative responsibility for the content of the sender member / members are belong.
Related News