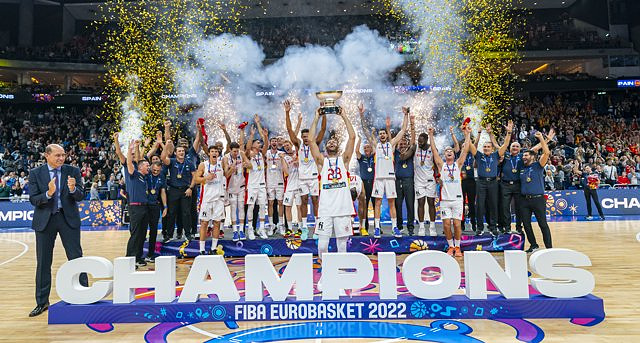 The Spanish basketball team has won the fourth Eurobasket in its entire history, a very special title due to the way in which it has been achieved, against all odds, in a final in which France was a great favorite and which has dried up in a A very complete game in which Spain has been ahead on the scoreboard for more than 38 minutes of the 40 game, and which has ended with the score of 88-76.

Juancho Hernangómez was uncovered in his best long game in the entire competition, scoring 27 points and capturing 5 rebounds, being the player who broke the final with an exceptional second quarter in which he scored six triples and completely dismantled France. The man from Madrid was chosen the 'MVP' of the final and scored nine shots in eleven attempts from beyond the line of three, a historic performance against which France could do nothing.

The other big name was Lorenzo Brown, chosen among the best five in the competition, just like Willy Hernangómez, and who finished the final with a 'double-double' of 14 points and 11 assists, which also means, in the passing section, a record in a Eurobasket final. In double digits of scoring were also the center, 14 points, and Jaime Fernández, with 13, who took advantage of the iron marking that France tried on Brown to uncover his scoring facet.

Spain dominated the match from start to finish, taking control of the scoreboard at 1:25 and not letting go until the championship was over. Sergio Scariolo's men were at all times very focused on the game and were not intimidated by moments of inspiration from France, who at times played spectacular basketball, typical of the great squad they presented in this championship.

One of the great keys was the defensive intensity, as the turnovers condemned France. The Gauls lost 19 balls, for the nine of Spain. Of those plays, the Spanish team got 35 points, while their rival only seven, a difference that was insurmountable. In fact, Spain stole 12 balls throughout the match, four of them Jaime Fernández, while France only did it three times.

Once again the outside defense of Alberto Díaz, Rudy Fernández and Lorenzo Brown, with the help of Jaime Fernández, was decisive and inside between the Hernangómez brothers, Usman Garuba and Xabi López-Arostegui they closed the ring to hardly allow offensive rebounds to France, who only captured five in 40 minutes of play.

It was not a path of roses for Spain, which despite reaching a 21-point lead in the second quarter at the moment of greatest inspiration from Juancho Hernangómez, went into the break only ten up. France began a 16-0 run there that extended into the third period, with Real Madrid player Guerschon Yabusele in the lead who threatened the national team and led to a three-point match (49-46).

That's where Sergio Scariolo stopped the game, changing the rhythm again and extending Spain's advantage, which entered the last quarter with a nine-point lead. Evan Fournier, with many foul problems, and Thomas Heurtel led the French resistance, but they found themselves very alone and did not have the consistency to really get close in the fourth.

In the last minutes, far from suffering, Spain read the game perfectly and despaired France, with Lorenzo Brown managing the pace of the game at will and Willy Hernangómez dominating Rudy Gobert in the paint, who was not decisive in any moment neither in defense nor in attack.

Sergio Scariolo even gave entry to Joel Parra and Sebas Saiz so that the Hernangómez brothers would receive an ovation and that the twelve players that he had brought first to Georgia and then to Germany would be on the court at some point on the historic day .

Both teams gave up playing the last seconds and madness broke out in the Berlin Arena, where Spain made history by proclaiming itself European champion again, a title that adds to the world champion it also holds, in which it was one of the The most complicated Eurobasket in history and to which Sergio Scariolo's men arrived in full reconstruction, with little experience and loaded with coins in the air that all ended up falling on their heads.