Spain maintains its hunger in a serious draw against Sweden

Vilda's renewed selection fought and looked for the goal until Cardona signed the 1-1 in 83'. 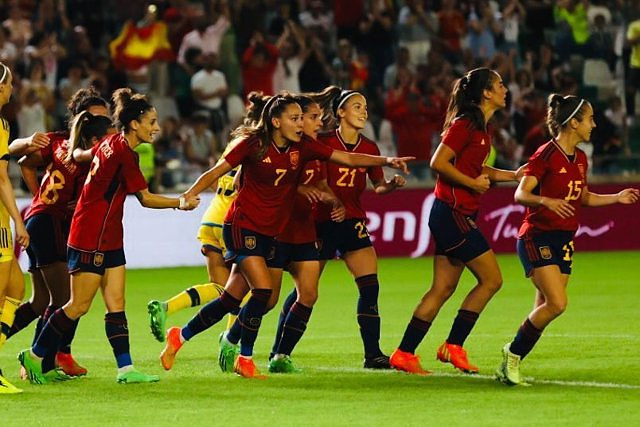 The Spanish women's soccer team drew a good draw (1-1) against Sweden this Friday in a friendly at the Nuevo El Arcángel de Córdoba, a performance to reinforce a renewed team after the latest controversies, but that showed the same hunger to continue growing with a view to the World Cup.

Jorge Vilda's girls suffered in the first half, especially due to Blomqvist's early goal in a defensive mismatch. However, Spain gained prominence as the minutes went by, they took possession of the ball and Sweden fell back without many options.

In the second half, Spain besieged the rival goal, especially with several good chances from Alba Redondo and in the 83rd minute they found the reward for a good game in Marta Cardona's goal. The Spanish team will face the United States on Tuesday, in another demanding test on the way to next year's World Cup.

The appointment organized by Australia and New Zealand next summer is the Spanish horizon, with no more at stake until that World Cup in which Spain aspires to confirm its entry into the international scene with stripes. However, the division in the locker room with the departure of 17 players has sown some doubts that Vilda's team dispelled for the time being.

As in the last European Championship, Spain demonstrated its ability to row in the face of adversity and managed to recover from the Swedish goal after 14 minutes, in three passes from the visiting defense. Sweden was conservative and Spain went up, with Alba Redondo forgiving the first clear. In the resumption, the change of script was total.

Athenea del Castillo was a dagger down the left wing and the Swedish goalkeeper Musovic became the best of hers. Alba and Esther also lacked aim, but the prize came in the final stretch, after a corner kick, in Cardona's boots. Those of Vilda, who made Nuria Rábano debut, played one on one against the third team in the FIFA ranking to maintain faith in a team that is still hungry for more.