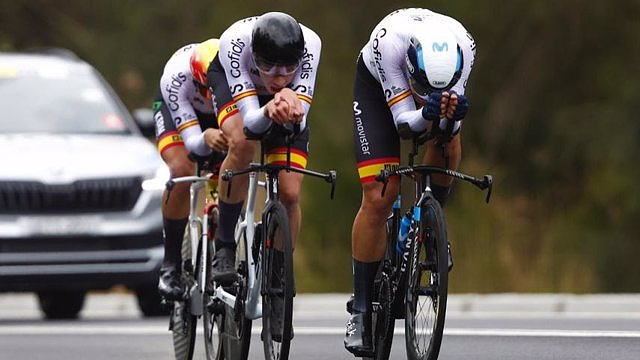 The Spanish cycling team finished tenth this Wednesday in the mixed team time trial during the Road World Championship, which is being held in Wollongong (Australia) and where Switzerland won the title.

Raúl García Pierna, Iván Romeo, Oier Lazkano, Lourdes Oyarbide, Sandra Alonso and Idoia Eraso, the six members of the Spanish relay, closed the 'Top-10' once again, after repeating position in 2019 in the celebration for the first time of this test in a world event of absolute category.

Now, in its third edition, Switzerland has donned the rainbow jersey for the first time in a race that had been dominated in previous years by Germany and the Netherlands. Raúl García Pierna, Iván Romeo and Oier Lazkano have been in charge of taking on the first lap of the Wollongong street circuit before taking over from Sandra Alonso, Idoia Eraso, and Lourdes Oyarbide, who have been in charge of completing the lap at the end .

The men's trio has completed their post in a time of 16:40, while the women's has closed the final time of 36:31, which allows them to occupy the tenth position in the final classification. In the fight for the title, Italy had to settle for silver, being three seconds behind the Swiss.

The podium was completed by Australia, which was among the first to leave and had the privilege of occupying the 'hot seat' for much of the time trial to the delight of the local fans. For their part, the Dutch saw their aspirations for another title frustrated after Bauke Mollema's mechanical problem and the fall of the Movistar Team rider Annemiek Van Veluten, who lost control of the bike.

This Thursday, the Wollongong World Road Championship will live its only rest day before the junior men's road race and later the men's U-23 will be held on Friday.