David Martín's men beat Italy 7-6 in a match in which the Spanish team was always ahead. 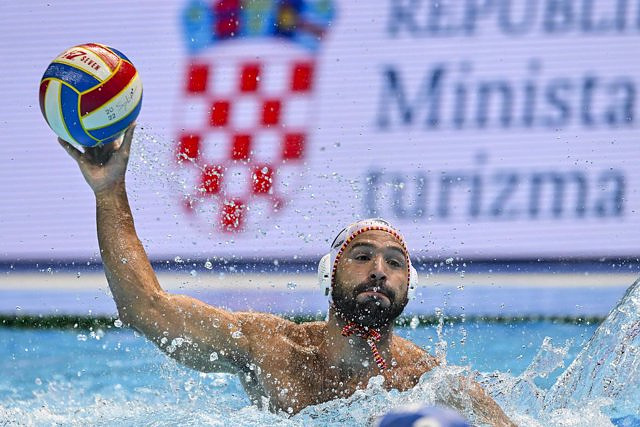 The Spanish men's water polo team won the bronze medal this Saturday after defeating Italy 7-6 in the match to define third and fourth place in the European Championship that is being played in Split (Croatia), after a tough, physical and somewhat cumbersome, in which the Spanish team was never behind on the scoreboard.

This bronze is the third consecutive medal in Europeans that the Spanish team has achieved, after the two silvers in Barcelona (2018) and Budapest (2020). Furthermore, the victory over the Italians comes after Spain beat Italy in the World Cup final in early July, taking gold 21 years later.

The duel started somewhat slower than expected, with Italy somewhat lost and not as tactically strong as usual, something that Spain took advantage of to quickly get ahead with a goal from Martín Famera. Italy responded with a penalty executed by Dolce, in a first quarter that ended 3-1 -Bustos and Barroso scored the other two goals-, a considerable advantage to face the second period of the match.

In the second eight minutes of play, Alberto Barroso warned the 'Azurri' with a powerful shot that hit the post. This seems to have woken Italy from a certain lethargy, which won the second quarter (0-2) and made it 3-3 on the scoreboard at half-time, thanks to a goal from Giacomo Cannella. His powerful shot went straight to the top corner, impossible for the Spanish goalkeeper Unai Aguirre, who completed a great game, with five high level saves before the break.

With a low score until the break, David Martín's men started more plugged in and made it 5-3 with goals from Marc Larumbe and Alberto Granados, who converted 16 goals in the championship. But Italy continued to make Aguirre work, who with a spectacular save, sticking out his hand in a violent long shot, maintained the Spanish advantage of two goals. However, Luca Damonte closed the gap for Italy, to reach the final quarter 6-4, after Bernat Sanahuja extended the Spanish mattress taking advantage of a superiority.

In the final eight minutes, Italy increased the intensity and aggressiveness and dried up Spain in attack. This allowed him to put the 6-6 on the scoreboard, with a somewhat controversial last goal, after a 'doubtful' penalty when they wanted to play with the buoy. Francesco Di Fulvio made no mistake from five meters to put Italy back in the match. Roger Tahull wasted a triple chance for Spain at the end, so we had to wait for captain Felipe Perrone's goal at the moment the Spanish team needed it most, to add his fourth bronze in a European Championship.

‹ ›
Keywords:
CroaciaItalia
Your comment has been forwarded to the administrator for approval.×
Warning! Will constitute a criminal offense, illegal, threatening, offensive, insulting and swearing, derogatory, defamatory, vulgar, pornographic, indecent, personality rights, damaging or similar nature in the nature of all kinds of financial content, legal, criminal and administrative responsibility for the content of the sender member / members are belong.
Related News