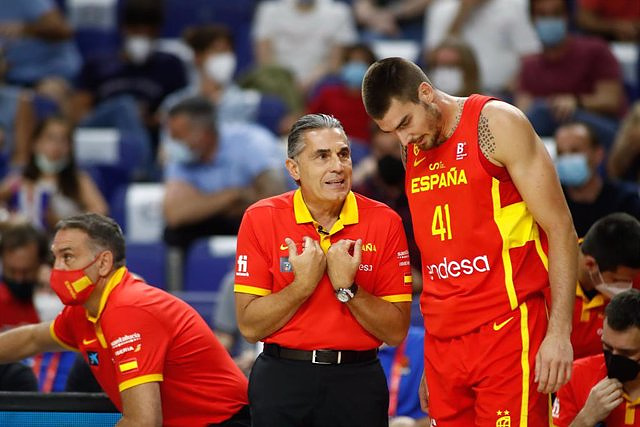 The Spanish men's team will meet in Madrid this Monday, August 1, to start the concentration prior to the Eurobasket, which starts on September 1, and play four preparation matches against Greece in Athens (August 9) and Madrid (11). and against Lithuania in Gran Canaria (16) and Vilnius (18).

Later, they will play the first two matches of the second qualifying phase for the 2023 World Cup against Iceland in Pamplona (24) and in the Netherlands (27). Before the start of the Eurobasket, in which the team is framed in the group stage that will play in Tbilisi with Bulgaria, Georgia, Belgium, Montenegro and Turkey.

The national men's basketball coach, Sergio Scariolo, provided this Thursday a pre-list of 22 players for the tournament, with the presence of the American guard Lorenzo Brown and Juan Núñez and Héctor Alderete, who last Sunday were proclaimed champions of Europe U-20 .

Brown, nationalized Spanish last July to be able to compete with the current world champion, will be one of the debutants along with Núñez, Real Madrid point guard and European 'MVP' in his category, and Alderete, forward who belongs to Movistar Students.

In addition, in this first list, Scariolo will be able to count on five 'veterans' who were in the last 2019 World Cup, such as captain Rudy Fernández, guards Sergio Llull and Quino Colom, and Juancho and Willy Hernangómez, two of the three 'NBA ' that he has been able to call together with Usman Garuba.

In this sense, the Spanish Basketball Federation (FEB) stressed that the incorporation of the Houston Rockets player "to work with the rest of the group", as well as that of the Real Madrid shooting guard Alberto Abalde, "will depend on the evolution of their respective injuries.

The rest of the players selected by the Italian coach are now regulars at the 'windows', including Xabi López-Arostegui, who was with the team at the last Tokyo Olympics, Jaime Fernández, Joel Parra and Darío Brizuela.

In addition, Sergio Scariolo clarified that "for physical, family or political reasons of his clubs" he has not been able to summon Ricky Rubio, Alex Abrines, Santi Aldama, Víctor Claver, Dani Díez, Sergi Martínez, Pierre Oriola and Guillem Vives. In this way, Barça does not contribute any player to this pre-list.

Speaking to the FEB press service, Scariolo admitted that the generational change facing the national team "is a great challenge." "We know the difficulty of the moment. We are very clear that the values ​​of the team do not vary, but the level of talent does," said the coach who assured that the team will continue to be characterized by values ​​such as "generosity", "cohesion", "companionship" and "sharing the ball on the court".

The official presentation of the team that will prepare the Eurobasket will take place this Tuesday, August 2, at the Daoíz y Velarde Municipal Sports Center, in an event after which the 'Media Day' will take place with the interventions of the national coach and the two captains of the team.