Albares defends that the new phase in the war in Ukraine shows that "aid is being effective". 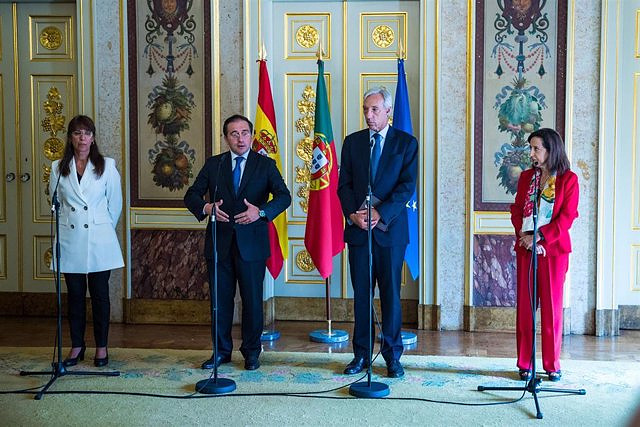 The Foreign Ministers of Spain and Portugal, José Manuel Albares and Joao Cravinho, have come out once again this Wednesday in defense of energy interconnections and in particular of Midcat, assuring that they do so out of solidarity with other European countries that could have problems of supply if Russia cuts off the gas.

Albares and Cravinho have participated together with the Ministers of Defense of both countries, Margarita Robles and Helena Carreiras, in the first meeting of the 2 2 format agreed at the last Spanish-Portuguese summit in 2020, which was held in Lisbon and which has allowed everyone they verify the "tune" in the points of view on issues such as the war in Ukraine or the energy crisis.

In subsequent statements to the press and asked about France's refusal to complete the gas pipeline through Catalonia, the Spanish Foreign Minister stressed that Midcat, like a good part of the proposals put forward by Spain and Portugal, are "Iberian solutions" that seek to be "constructive proposals" to face the "energy blackmail" of Vladimir Putin.

"Neither Spain nor Portugal have any difficulty in supplying energy," Albares stressed, recalling the "enormous regasification capacity" of the two countries and that therefore they will not be affected if Russia cuts off the gas tap.

For this reason, out of "solidarity" they want to make the regasification capacity available to those countries "most dependent on Russia" but, warned the head of Spanish diplomacy, "for this it is necessary to complete those few kilometers that remain for the gas interconnection of the Iberian Peninsula with the Central European network".

For his part, Cravinho referred to the announcement by the President of the European Commission, Ursula Von der Leyen, of a new European Hydrogen Bank, which he considered "an excellent idea and which points to European autonomy, which in his opinion time implies interconnections".

Likewise, the Portuguese minister stressed that "the positions that Spain and Portugal have been maintaining are gaining ground, are beginning to be better understood and will surely form part of the solutions that Europe needs".

Regarding the war in Ukraine, Robles has indicated that the two countries agree on the need to support Ukraine because doing so is "supporting values ​​and peace", hence the will of both to "increase and continue supporting" to the Ukrainians.

In turn, Albares has stressed that what both countries want is for "peace to return as soon as possible" and has defended that the new phase that seems to have opened in the war, with the Ukrainian offensive that has made it possible to recover a good part of the territory occupied by Russia, "shows that the aid is being effective".

The meeting, which Cravinho has described as "rich and dense", has also made it possible to discuss Africa, and in particular the Sahel, as well as the Indo-Pacific region and the will of the two countries to continue working together within of the EU and NATO.

Regarding the Sahel, Robles stressed that the situation in this area of ​​Africa "concerns us and it should concern us all" and therefore "we have to continue working together", taking into account both the reality on the ground and "our proximity to the values ​​and people" of this region.

"Portugal and Spain contribute and will continue to contribute to many issues in the EU" and "we have agreed to continue working together to make proposals that show that the two countries aspire to have solid leadership in the EU".