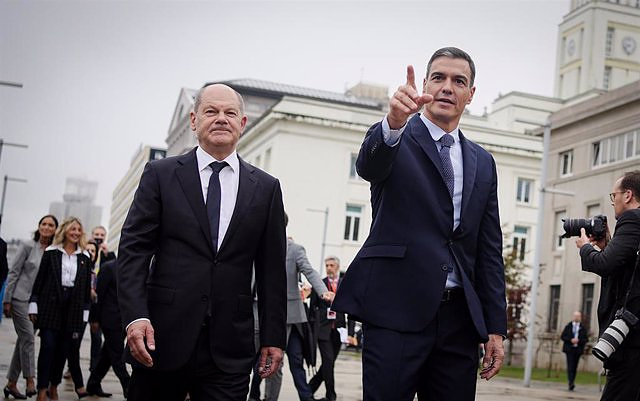 Spain and Germany have promised to strengthen European capabilities in the field of defense and strengthen cooperation on weapons and industry in the sector, although they have not made any mention of the European anti-missile shield or the possibility of Spain joining this project promoted by Berlin.

This is reflected in the joint declaration signed by the President of the Government, Pedro Sánchez and the German Chancellor Olaf Scholz this Wednesday at the 25th Spanish-German summit held in La Coruña, to which Europa Press has had access.

The two countries agree on the importance of reinforcing this collaboration "both bilaterally and within the EU and NATO", states the text to "guarantee the peace and security of its citizens", it adds.

However, the text does not mention the European anti-missile shield to which the German ambassador to Spain, María Margarete Gosse, referred on Tuesday, stating that both countries would address this issue at today's summit.

In an interview on Cadena Ser, the diplomat confirmed that there are talks "at a relatively low level" and that they will be discussed at the summit between the two territories. "We're probing," she said.

The German Chancellor, Olaf Scholz, advocated last August in Prague for the creation of a joint air defense system at European level with the aim of gaining "in security" on the continent by investing "significantly" in defense in the coming years after Russia's invasion of Ukraine and that Germany will lead the initiative.

However, Moncloa sources assured on Tuesday night that Spain has not received any proposal or communication in this regard.

In addition, the agreement signed by Sánchez and Scholz indicates that they are determined "to intensify their cooperation in the application of the Madrid Strategic Concept, approved at the NATO Summit in June, and to strengthen EU-NATO cooperation".

Also, to develop the Common Security and Defense Policy, to execute the Strategic Compass through specific actions and to collaborate in PESCO projects.