Spain alerts NATO to Russia's expansion in Africa: "Any gap left is taken advantage of by Russia" 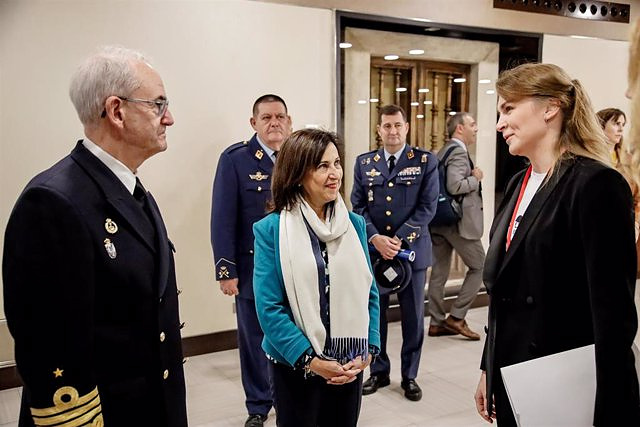 Spain has issued a notice to NATO this Saturday so that the war in Ukraine does not make it forget the challenge coming from Africa, where the expansion of Russia is increasing and jihadist terrorism is gaining ground.

Both Robles and the Chief of Defense Staff (JEMAD), Admiral General Teodoro López Calderón, have taken advantage of their intervention before the NATO Parliamentary Assembly that is meeting in Madrid to focus on the situation in the Sahel.

Spain already made efforts last June to ensure that the importance of the Alliance's southern flank was reflected in the Strategic Concept that came out of the Summit held in Madrid, which included the need to offer a "360 degree" vision of security and defense. degrees".

This Saturday, Robles warned that Russia "is finding a perfect extension field" in Africa, either directly through its Army or through the private company Wagner. "Any vacuum left by Europe or NATO in Africa is being perfectly taken advantage of by Russia", he has warned.

"Russia is invading Ukraine, but it is spreading in Africa and we all have to be aware of that," he insisted before representatives of the 30 parliaments of the allied countries, as well as many others from other associated nations.

JEMAD has also stressed that Africa has become an area of ​​"geostrategic competition". And he has shared that the growing Russian influence in the area is increasing its "destabilization" and reinforcing that African countries are dominated by political systems based on coups; in addition to the expansion of terrorism and the increase in other criminal activities such as people or arms trafficking.

"The vision of our Government is to try to avoid those gaps that, once they are left, are penetrated and taken over by these forces," he said, referring to Russia, which recalled that it also takes control of the exploitation of the natural resources of these countries.

This call comes coinciding with the withdrawal of the European Union military mission in Mali, which has been "suspended" for months and will reduce its presence to a maximum of 300 soldiers before the end of the year.

For the moment, Spain has defended the need to maintain a presence in Mali and currently maintains a deployment of 360 troops --the largest in the mission--, while other countries are announcing their withdrawal.

Robles has taken advantage of his speech before the NATO parliamentarians to recall the "failure" of the withdrawal from Afghanistan after 20 years of presence in the country and has given it as an example of the need to contribute to the development of the country beyond the presence military.

The minister has called for "learning lessons" from Afghanistan, where she has stressed that, after 20 years of NATO presence, women and girls are in a very bad situation "without access to education or certain jobs."

"This has to lead us to raise our visions and to show that a military presence is important but also to create scenarios so that a country can develop in accordance with the values ​​and democratic principles that NATO develops," he said.

‹ ›
Keywords:
TerrorismoUcraniaOTAN
Your comment has been forwarded to the administrator for approval.×
Warning! Will constitute a criminal offense, illegal, threatening, offensive, insulting and swearing, derogatory, defamatory, vulgar, pornographic, indecent, personality rights, damaging or similar nature in the nature of all kinds of financial content, legal, criminal and administrative responsibility for the content of the sender member / members are belong.
Related News