Manrique (Uavat): "What a pity that there are people who use the act today to do politics". 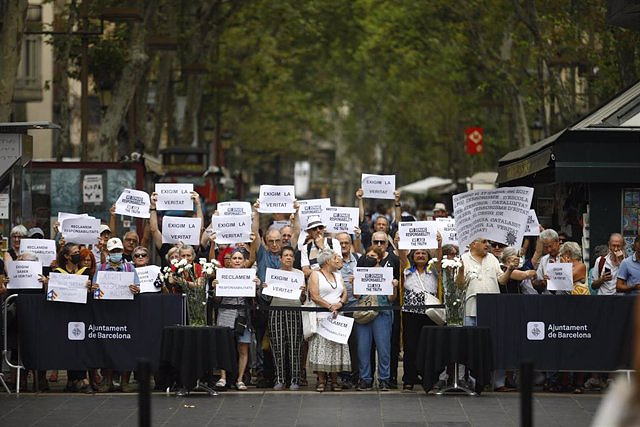 Manrique (Uavat): "What a pity that there are people who use the act today to do politics"

Some 40 people have gathered this Wednesday in the vicinity of the act of homage to the victims of the attack in Barcelona and Cambrils (Tarragona) on August 17, 2017 for the fifth anniversary with posters of 'We claim responsibilities' and 'We want to know the truth ', and have protested throughout the ceremony.

During the minute of silence, one of the protesters shouted: 'We are going to give Catalonia a little scare', in relation to some statements made by former commissioner José Manuel Villarejo.

At the end of the act, the president of Junts, Laura Borràs, approached the demonstrators, who greeted her with shouts of 'President', and chanted 'Els Segadors'.

For his part, the adviser of the Unit for the Care and Assessment of People Affected by Terrorism (Uavat), Robert Manrique, in statements to the media, criticized: "I have always said that an act of homage to the victims has to be free of messages politicians. What a pity that there are people today who use the act to do politics".

Likewise, Manrique has appealed to the population so that "if there are more acts in the future, the act is respected from beginning to end".

‹ ›
Keywords:
Terrorismo
Your comment has been forwarded to the administrator for approval.×
Warning! Will constitute a criminal offense, illegal, threatening, offensive, insulting and swearing, derogatory, defamatory, vulgar, pornographic, indecent, personality rights, damaging or similar nature in the nature of all kinds of financial content, legal, criminal and administrative responsibility for the content of the sender member / members are belong.
Related News